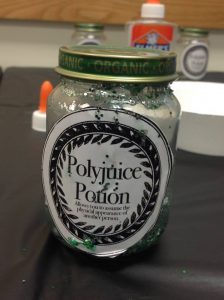 By JESSI STICKEL
Special to the Maryland Independent

As children entered the children’s wing of the library they randomly chose their Hogwarts house and received a ticket to the Hogwarts Express, a Hogwarts paper tie to color in the theme of their chosen house and a plastic wand.

Some children came to the celebration in costume, mirroring the movie’s main characters, with robes, ties, scarfs, glasses and even painted on scars, like Harry Potter.

When it was time for the Hogwarts Express to leave, the children entered through the famous 9 ¾ brick wall like in the books and films.

Once inside Hogwarts, children were assigned to go to wizard classes to complete various hands on activities. They created slime in potions class and a Mandrake character from the series in herbology class. The children also played the Hogwarts game Quidditch and tested their magic abilities by putting spells on a Dementor.

This was the first time the Potomac library has hosted a birthday celebration for the fictional character.

“It’s high interest for the children and it gets the kids to read the [Harry Potter] books, instead of just watching the movies,” said Sarah Anderson, children’s supervisor at the Potomac library.