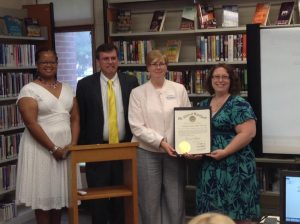 P.D. Brown Memorial Library hosted a reception for the traveling disAbility History Tour on Tuesday in conjunction with the Maryland Department of Disabilities.

The tour celebrates the 27th anniversary of the Americans with Disabilities Act (ADA), with the primary draw being a five-panel display titled “Advocacy: A History of People Speaking Up for Themselves,” on loan from the Museum of disAbility History. The collection tracks the progression of the advocacy movement from early educational facilities to organizations dedicated to the cause. A sixth panel designed by a local group depicting disability history in Maryland will be added at the conclusion of the tour. Charles County is the fifth stop on the six-city trip, and the display will be available for viewing until August 19.

A video of former president George H.W. Bush signing the ADA greeted the audience of two dozen people at the reception, followed by a dialogue from department officials and library staff about the significance of the act.

The occasion hit close to home for Charles County Public Library Executive Director Janet Salazar, who has multiple relatives that utilize ADA services. She drew parallels between the legislation and the library while addressing the crowd.

“The Americans with Disabilities Act has some things in common with the public library,” Salazar said. “The ADA provides for equal opportunity for persons with disabilities in employment, state and local government services, public accommodations, commercial facilities and transportation. In the public library, we affirm the right of all library users to open access of information.”

The event closed with an appearance by Deputy Secretary of Disabilities William Frank, who spoke about the importance of celebrating the act and spreading its principles throughout the community.

“We are committed to a Maryland in which all citizens are able to access the same resources and services,” said Frank, before presenting a citation to Salazar and library staff to applaud them on their participation in the tour.

Charles County Commissioner Amanda Stewart (D) attended the event and said she plans to draw up a proclamation to bring attention to the celebration. As for the local government’s role in disability awareness, Stewart explained the administration is responsible for making sure facilities in the county are in in compliance with ADA regulations.