Masks are required for all library visitors age 5 and up. For more information click here.
We are OPEN! Click here for our updated reopening and FAQs.
CCPL is now taking Passport applications! Click here for more details.

Looking for your next great read, but unsure where to start? Check out these books recommended by our teen readers!  You’ll find everything from historical fiction to dystopian future worlds. 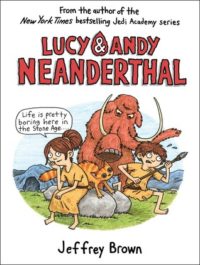 Lucy and Andy are your typical Stone Age tweens–longing to go on a mammoth hunt, making their own clothes, doing cave paintings.  Step into the past with this fun, yet illuminating, series!

Anonymous says: “I really liked how I got to experience the Stone Age in this graphic novel. I learned a lot by reading this and it was exciting to read in the comic format instead of a regular book format. Before reading this book, I did not know what a Neanderthal was. This book is about two archeologists who are studying the life of the Neanderthals while it tells the story of Lucy and Andy.” 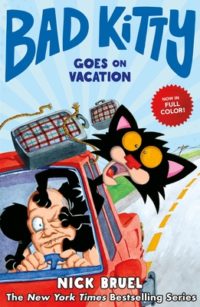 Bad Kitty is excited when Uncle Murray wins a free vacation, but the trip is not what they expected!  Just getting there is a challenge, and then things go from bad to worse.  Will the two be able to make it through?

Anonymous says: “I really liked this book. In Bad Kitty Goes on Vacation, Uncle Murray wins a trip and takes Bad Kitty to Love Love Angel Kitty World. Bad Kitty is, of course, Bad Kitty like usual. I like the book because the uncle yells a lot and he has seven stages of freaking out.” 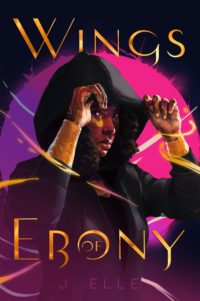 Wings of Ebony by J. Elle

After her mother is killed, Rue is taken away from her sister by the father she has never met.  Suddenly, she is living in Ghizon, a hidden realm for those who wield magic.  But Rue still longs to see her sister, so sneaks back to the human world, only to find that her sister is prey to dark forces.  Only by embracing her new powers can Rue save everyone she loves.

Joshua says: “Wings of Ebony is one of those fantasy/sci-fi books you might think is more of a children’s book, but the plot line and writing makes it a great teen’s book. Overall, I think it’s an amazing story featuring the problems about racial discrimination (even in magical societies) and how one woman fights back and comes out making a name of herself. In another description, five-star fantasy-sci-fi-racial justice-teen book that will keep you loving the book forever.”

Mara is one of the last free nations in the world, under attack by mutant beasts known as Ghosts, that are sent by the KarensaFederation.  A group known as the Strikers is trained to fight the Ghosts, but defeat seems certain.  Still, one Striker, Talin Kanami, holds out hope.  And a new prisoner just might be the answer they are looking for.

Michah W. says: “I was pleasantly surprised as to how much I liked this book. As a person who never really reads books, mostly because they don’t really keep me engaged or intrigued, but Skyhunter had me invested in the storyline and characters. I would definitely recommend this book!” 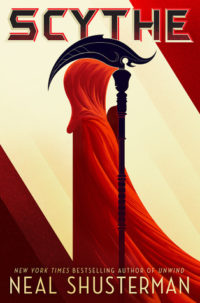 In a utopian world, death has been defeated and the population kept under control by the act of “gleaning,” killings performed by trained Scythes.  Citra and Rowan have been chosen as apprentice Scythes, though neither wants the job.  But, then, in an unexpected twist, the council decrees that only Citra or Rowan can pass the training, and the other must die.  Can the two find a way to survive, while rooting out the corruption that has infected the council?

Joshua says: “Scythe is about two kids who are apprenticed to a person called a “Scythe” and have to kill people to keep the population from exploding in an already perfected world. The book is the first in a trilogy called Arc of a Scythe, and makes some interesting moral questions that are shown brilliantly throughout the whole series. There are plenty of exciting elements, twists, and a battle fought through government and thinking instead of brute force.”