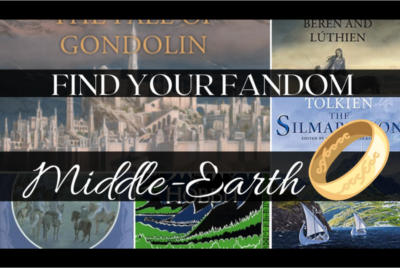 English author J. R. R. Tolkien (1892-1973) is perhaps best known for writing The Lord of the Rings, a high fantasy story that tells of the discovery of an evil Ring and the Hobbit Frodo who sets out to destroy it.  However, The Lord of the Rings, and its prequel The Hobbit, are only two stories that Tolkien set in his fictional world of Middle-earth.

Tolkien’s dream was to create an entire mythology for England.  To do so, he created the world of Arda, an imaginative vision of our own Earth, thousands of years ago.  (Middle-earth is only one part of Arda, like North America is only one part of Earth.)  He then wrote an entire history of his world, beginning with its creation and ending with the stories of The Hobbit and The Lord of the Rings, set in the Third Age.  Readers who enjoy these stories may want to delve deeper into the history of Middle-earth.  But where to start?

Our guide explores the intricacies of decades’ worth of Tolkien’s work, suggesting good starting points for readers new to Middle-earth, as well as explaining which works are more scholarly than literary in nature.  Fans old and new alike should find something to enjoy from Tolkien’s vast oeuvre.

First published in 1937, this classic children’s book follows the adventures of the Hobbit Bilbo Baggins as he journeys through Middle-earth to steal back the treasure of the Dwarves from a mighty dragon.  The book serves as a sort of prequel to The Lord of the Rings (LotR), and Tolkien later revised the story to make it fit in with the story of LotR.  This is a wonderful introduction to the world of Middle-Earth for new readers.  It can be read as a standalone.

The Lord of the Rings

The Lord of the Rings was actually written by Tolkien as one book, but his publishers decided to break it into three volumes due to a paper shortage.  The three volumes (often referred to as a “trilogy”) are The Fellowship of the Ring, The Two Towers, and The Return of the King.  The book tells the story of the Ring discovered by Bilbo in The Hobbit, and how the Free Peoples of Middle-Earth learned it was an evil artifact of the Dark Lord Sauron’s that had to be destroyed to ensure the safety of the world.  This book is a natural starting point for new readers.  It has a more serious tone than The Hobbit and is not usually considered a children’s book.

The Hobbit and The Lord of the Rings take place in the Third Age of Middle-Earth.  The Silmarillion is a collection of Tolkien’s writings about the creation of his world Arda (of which Middle-Earth is one land mass) and its history through the First, Second, and Third Ages.  Much of the action revolves around the titular Simarils, wondrous jewels that contain heavenly light and which are the cause of strife between the Elves and the world’s first Dark Lord Morgoth (once Sauron’s master).  Tolkien himself never finished writing The Silmarillion, so this work was posthumously compiled and edited by his son Christopher in order to create a smooth, cohesive narrative from his father’s drafts.

The Silmarillion is generally regarded as a somewhat difficult work to approach, due to the high style of the writing, as well as the abundance of names and characters Tolkien includes.  The work does, however, contain some of Tokien’s most celebrated stories, such as the tale of Beren and Lúthien.  The book is best appreciated by readers who are already familiar with The Hobbit and LotR.

The Great Tales refer to three key stories that take place in the early days of Middle-Earth, which Tolkien saw as integral to the overarching narrative of the Silmarils and the One Ring.  Versions of the Great Tales can be found in The Silmarillion, but Christopher Tolkien later published a separate volume for each Tale.

The Silmarillion contains Christopher’s edited versions of the Tales, made to fit into a cohesive narrative.  In contrast, the separate volumes contain each of Tolkien’s drafts, so readers can see how Tolkien constantly reworked the stories throughout his life, sometimes trying a story in verse, then in prose, and often changing narrative details.  There is no truly finished version of any of the Great Tales, only various working manuscripts.

The three Great Tales are The Children of Húrin, Beren and Lúthien, and The Fall of Gondolin.  Readers may wish to read The Silmarillion before diving into the Great Tales, so that they have the background information necessary to understand the wars that the characters in the Tales are involved in.

The Children of Húrin

Húrin, a Man, is captured by the Dark Lord Morgoth during a battle and held as captive.  Morgoth curses Húrin’s children, so that everything they touch comes to ruin.  Through the years, Húrin is made to watch as his son Túrin is exiled after a murder and his wife and daughter are forced by enemies to flee into the wilderness.  The book raises the question of whether the children of Húrin are truly trapped by fate and Morgoth’s curse, or if Túrin’s pride is the real source of their suffering.  It is based on the Finnish legend of Kullervo, a hero whose story is found in the Kalevala.

This is a story of star-crossed lovers whose commitment to each other is so great that they can defeat even death.  The Man Beren falls in love with the immortal Elf maiden Lúthien.  Lúthien’s father agrees the two can be together, but only if Beren can wrest a Silmaril, a magical jewel, from the crown of the Dark Lord Morgoth.  But even if he succeeds, in agreeing to marry Beren, Lúthien will have to give up her immortality.  Tolkien had the names of Beren and Lúthien inscribed on the gravestones of himself and his wife Edith, thereby linking the couple with Tolkien’s greatest love story.

The Fall of Gondolin

In the First Age, the Elves built a secret city, safe from the power of Morgoth.  But a betrayal reveals their location to him, causing the city to fall and the inhabitants to flee into the wild.  This story introduces Tuor and Idril, the parents of Eärendil the Mariner.  Tolkien links this story to LotR by having Bilbo sing about Eärendil in The Lord of the Rings when he is in the house of Elrond (Eärendil’s son).

This volume contains a number of manuscripts compiled by Tolkien’s son Christopher after Tolkien’s death.  Unlike The Silmarillion, the book does not try to present a cohesive narrative, but simply presents Tolkien’s writings in their unfinished state.  This volume is best enjoyed by avid fans who have already read The Lord of the Rings and The Silmarillion, as it contains more information about characters and events from those works.

The History of Middle-Earth

This 12-volume series follows the evolution of Tolkien’s Middle-earth, analyzing manuscripts and scraps of writing to explore how Tolkien’s work developed over time.  This is a resource highly regarded by scholars, though not widely read by more casual Tolkien fans.

Read the series!  If we do not have what you are looking for, you can request a loan through Marina.

Published as a picture book in the 1990s, this poem is a song supposedly composed by Bilbo as he travels to the Grey Havens.  In this way, it functions as a sort of epilogue to The Lord of the Rings.

The Hobbit and LotR were made into two separate trilogies of films by director Peter Jackson.

Check out the films!

Books about Tolkien and His World

Want to know more about Tolkien and Middle-Earth?  Here is a brief selection of resources to get you started!