Find Your Fandom: Doctor Who 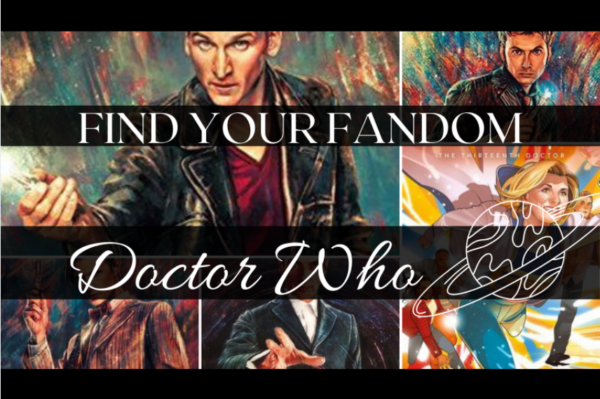 Are you looking for a new fandom to immerse yourself in, but are not sure where to start? “Find Your Fandom” is a series that provides the information you need to figure out where to start in your new fandom journey. Keep checking back on the blog for future installments!

Doctor Who is a British science fiction TV show, which first began in 1963 with William Hartnell playing the lead role. It follows the adventures of an extraterrestrial named the Doctor, who travels through time and space in a spaceship known as the TARDIS. The Doctor typically travels with one or more (usually human) companions and together they rescue people and save planets.

The show has maintained its longevity in part because, as an extraterrestrial known as a Time Lord, the Doctor is able to regenerate when killed. Each new regeneration gives the Doctor a new body and a new personality. Thus, each time an actor playing the Doctor leaves the show, the Doctor regenerates into a new version of the Doctor. Each regeneration is numbered for easy reference.

So where do you begin with a fandom that has such a long history? Watching some of the TV episodes will be helpful before jumping into any of the spinoff series or comics, but there are many possible starting points. Our guide explains some of your options.

Doctor Who: The Complete First Series

Perfect for viewers who want to start at the beginning of New Who, this series marks the return of the show to TV in 2005 after its 1989 cancellation, so it provides all the relevant background information for new audiences.  Christopher Eccleston stars as the Ninth incarnation of the Doctor.

Doctor Who: The Complete Second Series

Series 2 marks the introduction of David Tennant as the Tenth incarnation of the Doctor.  This could be a good starting point for new viewers since it is the beginning of Ten’s story arc.

Doctor Who: The Complete Third Series

Series 3 is widely regarded by Doctor Who fans as one of the best seasons of “New Who” and many recommend it as a starting point to hook new fans.

Doctor Who: The Complete Fourth Series

This is an entertaining series, but probably not a good place for new fans to start since it references story points from previous seasons.

Doctor Who: The Complete Specials

These special episodes are the bridge between Ten’s final days as the Doctor and the introduction of the Eleventh Doctor, played by Matt Smith.  You’ll want to watch them after you finish series 2-4.

Previous lead writer Russell T. Davies left the show at this point and was replaced by Steven Moffat, who generally does not refer back to his predecessor’s work, making the Eleventh Doctor a good starting point for new viewers.

Matt Smith’s turn as the Eleventh Doctor also marked the point at which Doctor Who began to gain increased popularity in the U.S.  Smith became many viewers’ “First Doctor” and continues to be a fan favorite.

Doctor Who: The Complete Fifth Series

Doctor Who: Series 6, Part One

Doctor Who: The Complete Seventh Series

Doctor Who: The Day of the Doctor (50th Anniversary Special)

This special reunites Matt Smith’s Doctor with David Tennant’s, while exploring the repercussions of the Time War.  As an anniversary special, it contains numerous references to previous seasons and characters, and it is best enjoyed by viewers who have some familiarity with the show.

The 50th anniversary special is followed by “The Time of the Doctor” (Matt Smith’s last Christmas special and last appearance as the Doctor).

Peter Capaldi took over as the Twelfth Doctor for series 8 and stayed for three seasons.  New fans can start with series 8 and not feel lost since the episodes largely do not reference past seasons.

Doctor Who: The Complete Eighth Series

Doctor Who: The Complete Ninth Series

Doctor Who: The Complete Tenth Series

Doctor Who: Twice Upon a Time

This is Peter Capaldi’s last Christmas special and last episode as the Doctor, before the appearance of the show’s first female Doctor, played by Jodie Whittaker, in series 11.

Steven Moffat left the show as lead writer after Peter Capaldi’s run and was replaced by Chris Chibnall, who essentially rebooted the show with a new Doctor (Jodie Whittaker) and new companions.  New audiences can start here without having to worry about what happened in previous seasons.

Whittaker’s Doctor has been compared favorably by fans to David Tennant’s and the new series are known for being socially conscious, touching on issues such as racism and climate change.  The show is ongoing and series 13 is scheduled to premiere in 2021.

Doctor Who: The Complete Eleventh Series

Doctor Who comics typically feature adventures that are not related to the show or are assumed to have taken place during some unspecified time between episodes.  Familiarity with the show may be helpful, but the adventures are usually self-contained.  Here are a few places you might like to start: 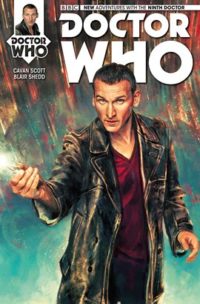 Doctor Who: The Ninth Doctor Issue #1

Doctor Who: The Tenth Doctor Volume #1 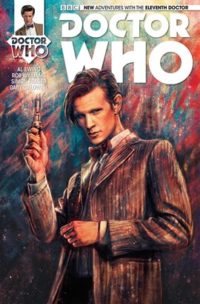 Doctor Who: The Eleventh Doctor Issue #1 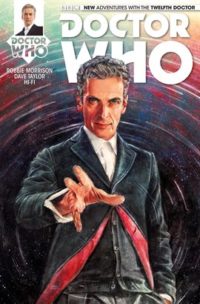 Doctor Who: The Twelfth Doctor Issue #1 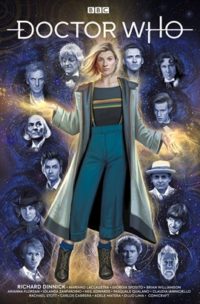 Doctor Who: The Thirteenth Doctor Issue #0

This spinoff series features Captain Jack Harkness, a previous companion of the Doctor’s, along with a team of individuals who comprise the Torchwood Institute and protect Earth from extraterrestrial harm.  The show is aimed towards teens and adults, unlike Doctor Who, which is considered more family friendly.

This spinoff series features journalist Sarah Jane (Elisabeth Sladen), a previous companion of the Doctor’s, and her robot dog K9 as she has adventures involving aliens.  The show is aimed at a younger audience than that of Doctor Who.  The show ended after the death of Sladen.

Can’t find what you are looking for in the catalog?  Try searching our state-wide catalog Marina to see if another library is able to lend you the desired items!