Documentaries for Teens Quill Life of a Guide Dog 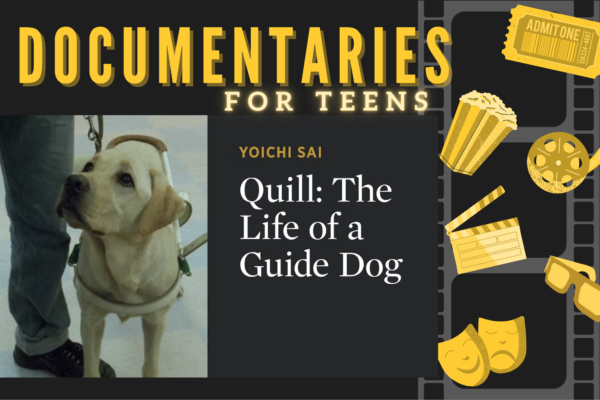 *This documentary is in Japanese and only offers captions, no dub*

Fuzzy Warning: This documentary will make you want to adopt a puppy – a Labrador Retriever puppy specifically!

The documentary begins with the birth of five yellow lab puppies, and boy, are they adorable! One stands out from the rest, though. While every other pup sports a soft yellow coat, one has a black cross on the back leg, and this will be our main protagonist, Quill.

At the two/three month mark, the owner of the dogs, Ms. Mito, calls the “Chief” and asks if all five of the puppies can be used as guide dogs. The Chief says no, he will take only one. Ms. Mito asks him how she will know which one to pick. The Chief instructs her to call them to her, and whoever does not come will be the candidate he takes for training. Why? Because the guide dog must be focused on its owner in order to be a successful guide in varying surroundings. She does as he says, and she finds that the only one who doesn’t react is Quill.

Quill is then flown to his foster parents, a sweet couple who are veterans in helping pups get used to being handled before they shift to guide dog training which begins once the dog turns one year old. During the year of having Quill, or “Qoo” as he is called in Japanese, Quill goes on walks, drops his owner off at the bus station, and experiences snow for the first time. It’s a very eventful year, I think!

It doesn’t end there, though, and once Quill turns one, he is taken to guide dog training, where we will see if he can actually become a successful guide! Here we meet the Chief, a calm and knowledgeable man who can still be surprised, especially by Quill. On one outing, they meet the grouchy Mr. Wantanabee, a man who went blind from an accident and is very happy with using a walking cane; thank you very much.

The Chief offers Quill to guide Mr. Wantanabee in order for him to make his 3:00 meeting. Will he concede and let a dog guide him? Find out by watching this adorable docu/film, Quill: The Life of a Guide Dog!