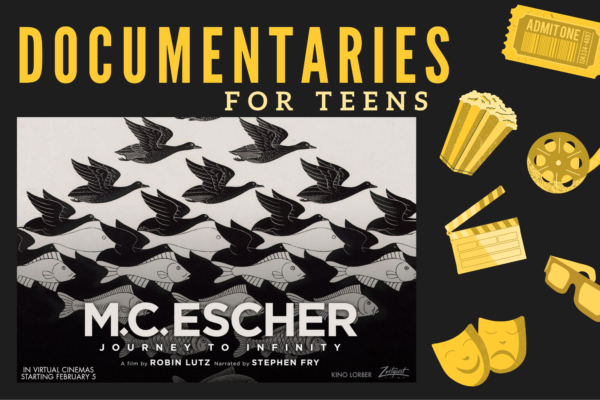 Humans have enjoyed using many different mediums of art over the past hundreds and hundreds of years. For instance, the Greeks used clay pots to tell stories arced by their mythology. In this documentary, we will be learning about M.C. Escher, and his era of graphic design. In M.C Escher: Journey to Infinity, we learn more about the artist. M.C. Escher who was a Dutch graphic artist born on June 17th 1898 to a wealthy family of “actual sciences.” He went to the Haarlem School of Architecture, Decorative Arts and Artistic Crafts, where he originally studied architecture, until his professor, Samuel Jessurun de Mesquita, urged him to draw. Without this encouragement from his professor, we might not even have a documentary to watch about him!

Narrated by the great English actor and director Stephen Fry, the documentary opens with a typewriter typing the artist’s quote, “I am afraid there is only one person in the world who could make a good film about my prints; me.” This goes to show what an exact visionary Escher was during his time. As the documentary continues, we learn more about Escher’s life. How he went to school to be an architect, but a professor told him to change majors, how he met his wife who was escaping from Russia and the Bolsheviks, escaping from fascisim in Italy, World Wars, and being part of a family. Stephen Fry brings Escher’s journal entries to life as he explains inspiration of his most famous pieces, and his experiences as he navigated through the world.

I just loved this documentary. The animation used for sequences and videography used to tell the story of a man who didn’t believe that he was an artist is just so thoughtful. It is seamless and blends everything together. I think my favorite aspect was the narration, as it really helped us see how Escher’s mind worked. For example, when he is trying to explain the sky over Tuscany he says, “My poor eyes are staring, and my poor brain is trying to comprehend the incomprehensible.”

Or how he explains his patterns and that they may originate from a game he played as a kid.

“As a little boy lying in bed at night, I would enjoy playing with associative thoughts. For example I would say, ‘how can I find the logical connection between the letter S and the tail of a dog? A thousand ways to get there. For example, S; sky, bird, nest, branch, tree, garden, dog, tail. I’ve played a lot of these games, and I actually haven’t gotten much further. I’ve merely found a way to express these thoughts visually.”

Viewers will enjoy this documentary too as it encapsulates history, and educates what makes an artist and artist.