It would be hard to argue against the fact that in 2020, hip hop is the most popular (and most prevalent) form of music.  From downloads to streaming, and even the radio, rap and hip hop artists are music’s biggest, most profitable figures.  But in the late 90s and early 2000s, rock was still king, and showed no signs of slowing down. In fact, rock was so big that even genres that were once considered “counterculture” became mainstream;  Specifically, punk rock.  A staple of 70s anti-establishment culture, punk grew to prominence through bands like The Ramones, The Misfits, The Clash, and Black Flag. Over time, the sound evolved and by the 90s bands like Blink-182, New Found Glory, and Charles County’s own Good Charlotte had made punk rock socially acceptable (to the pleasure of many, and disappointment of others) with an offshoot of the genre most labeled “pop punk”.  While no one seems to be able to agree when a band stops being “punk” and starts being “pop punk”, we searched Freegal, CCPL’s new music streaming service, and found 8 great albums for you to enjoy and decide for yourself! 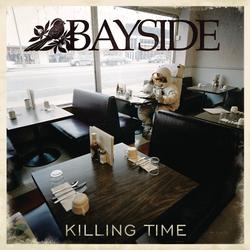 Bayside finds a way to be both soul crushing and life affirming all at the same time, which is a pretty incredible feat.  Releasing on Wind-up Records in 2011, Killing Time is their fifth studio album, and their first (and only to date) major label release.  While a lot of Bayside’s releases focus heavily on getting through heartbreak (and make no mistake, this album has some emotional tracks), Killing Time chooses instead to look at the other struggles in life, and promises that while growing up might be hard, those struggles end up making us who we are.  Lead singer Anthony Raneri’s creative ways to describe interpersonal struggle (“Mona Lisa, you’ve really done something/You’re the black ice on my road to wholesome” in Mona Lisa, for instance) are evident throughout the record and will give you new and interesting ways to describe the hardships you face on a daily basis. Covering everything from feelings of inadequacy (It’s Not A Bad Little War) to commentary on the music industry (Seeing Sound), Killing Time has a little something for anyone struggling to find their path through life.

Track to check out: “Seeing Sound” 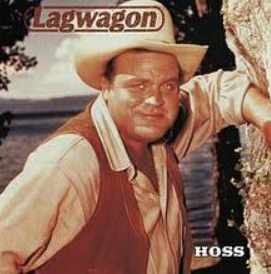 Lagwagon has long been considered the “thinking man’s punk band” because of frontman Joey Cape’s poetic, often times dense lyrics and social commentary.  Part of the fun of listening to Lagwagon is trying to figure out if the lyrics being sung should be taken literally, or if they’re a metaphor for something. Originally released in 1995, Hoss, named for a character on the classic TV show Bonanza, is at times, a little more straight forward than other records.  The original release featured 14 songs about everything from bad break ups (stand out tracks Violins and Razor Burn) to commentary on how friends and their choices can affect someone personally (Name Dropping), but also features tracks that allow for interpretation (Rifle and Black Eyes). Fortunately, when the album was re-released in later years, it contained the original 14 songs and a ton of B-sides and rarities, including fan favorite Wind In Your Sail. If you’re looking for something with substance deep below the surface, Lagwagon is a fine choice.

Track to check out: “Wind In Your Sail” 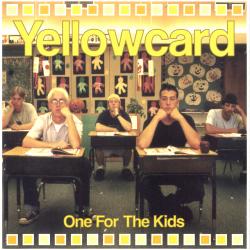 Yellowcard – One For the Kids

You might not think a violin could be a prominent part of a rock band’s make up, but Yellowcard would prove you wrong.  Rising to prominence with their 2003 album Ocean Avenue, Yellowcard used what could’ve been considered a gimmick by many to define their own sound.  Two years before that, though, they released One For The Kids, their third album, but the first with any kind of mainstream attention.  While Yellowcard still use traditional lead and rhythm guitars, they also throw in a violin for good measure, and it works way better than it has any right to.  Lyrically, the songs are almost all about young love and/or heartbreak (Big Apple Heartbreak, October Nights), but a couple tracks (Sureshot, Starstruck) are positive anthems about following your dreams no matter how many people tell you not to.  One For The Kids has a good mix of high energy songs and laid back or acoustic tracks, making it a good choice for any mood.

Track to check out: “For Pete’s Sake” 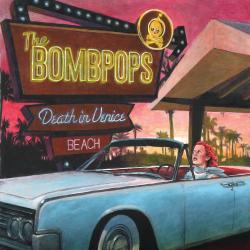 The Bombpops – Death in Venice Beach

Finding female lead punk bands is rare, but The Bombpops are one, and they’re absolutely worth checking out.  Their second album, Death in Venice Beach, released in March 2020, and it has all the makings of a classic.  High energy songs about death, both literal (Dearly Departed) and metaphoric (Southbound Stranger) help drive the record, and from the moment it opens, it doesn’t let up.  It manages to cover a wide range of topics from struggles with alcoholism (Can’t Come Clean, 13 Stories Down) to a great track that uses the 2019 burning of Notre Dame as a metaphor for a broken relationship (Notre Dame).  Death in Venice Beach is also the only album we’ve ever come across that features a song about battling diabetes (Double Arrows Down), so it has that going for it.  Infectious harmonies and sing along choruses will keep you humming these tracks for the rest of the day. 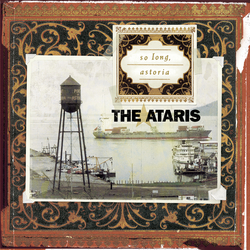 The Ataris – So Long, Astoria

Since The Ataris first album in 1997, lead singer Kristopher Roe has always had a penchant for spilling out his heart in an open, honest, relatable fashion.  That trend continues in 2003’s So Long, Astoria, a love letter to growing up and the role your youthful experiences play in the process.  While this album is probably best known for the band’s cover of the Don Henley hit “The Boys of Summer”, it also contains other standout tracks, including “Unopened Letter to the World” (a song written from the point of view of poet Emily Dickinson) and the title track, which is inspired by the classic 1980s film The Goonies.  Over almost an hour, The Ataris sing songs covering complicated feelings like a father’s remorse for having to leave his child for work in “The Saddest Song”, to the young love anthem “I Won’t Spend Another Night Alone”, whose lyrics include tongue-in-cheek promises like “We’d buy a small house in South Central LA/Raise lots of kids, then we’ll both join a gang” and “I’d rob a Quick-E-Mart for you/I’d go to the pound and let all the cats go free/Just so long as you’d be with me”. This is a great album to play on a summer drive with the windows down and the volume up.

Track to check out: “Looking Back on Today” 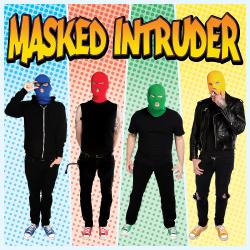 The cover of Masked Intruder’s self-titled release tells you almost everything you need to know about the band. The colored masks and matching tennis shoes are not just a clever fashion choice for this one picture, this is actually how they dress when they perform.  When the Madison, WI band takes the stage, they play in the colored ski masks, playing the role of four ne’er-do-well criminals who just happen to play punk rock.  They’re accompanied by a “court appointed police officer”, and practically all their songs contain some allusion to their criminal endeavors, and how those criminal endeavors have affected their love life.  “Hello Beautiful” features the lament of a criminal who breaks into a house to rob it, but falls in love with the inhabitant instead.  “25 to Life” finds our heroes begging their lady to stay with them for the length of a typical jail sentence.  With a tongue-in-cheek approach to the classic pop punk love song format, Masked Intruder sets themselves apart from other bands doing similar things.  They’re catchy, fun, and you’ll find yourself singing along through the whole record.  Just make sure you’re alone, just in case someone might mistake YOU for a masked intruder.

Track to check out: “How Do I Get To You” 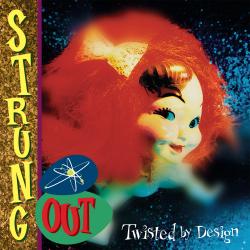 Strung Out – Twisted By Design

Writing punk songs using metal sensibilities has always been a strength of Strung Out’s, which helped to define their sound when they broke onto the scene in the late 90s.  1997’s Twisted By Design bridges the gap between their “punk” years, and their turn towards a more intricate sound that broke a lot of the stereotypes of what a punk band could be.  The album opens with the high energy “Too Close to See”, about not letting the bad times in life overshadow the good times, and while the rest of the album keeps the energy up, a lot of the songs are about accepting personal responsibility (sometimes even blame) for your choices.  “Mind of My Own” delves into how pessimism and a dark view of life can be a cyclical curse. “Deville” talks about the feelings one has when they can’t get out of their own way, no matter how hard they try. Strung Out’s sound bounces between upbeat skate punk and heavier songs like “Ice Burn” and “Reason to Believe”, and they even throw in “Asking for the World”, a track that qualifies as a ballad by the album’s standards.  If you’re looking for high quality musicianship in your punk rock, Strung Out is a great place to start.

Track to check out: “Matchbook” 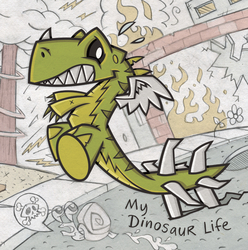 While the adorable winged dinosaur (Is that just a dragon?) on the cover would be a good enough reason to recommend this record, the songs themselves also hold up.  Released in 2010, My Dinosaur Life is Motion City Soundtrack’s only release on a major label (Columbia).  Jumping between driving, up tempo songs (Disappear, A Life Less Ordinary) and more methodically paced tracks (History Lesson, Stand Too Close), My Dinosaur Life features a little something for everyone.  Leaning on emo sensibilities without drifting too far away from their rock sound, Motion City Soundtrack manages to craft catchy anthems with avant garde lyrics full of vivid symbolism (“Like a slasher film, I’m torn in opposite directions/The plot sucks, but the killings are gorgeous” in Pulp Fiction), all while keeping a largely positive tone.  The album’s closing track, “The Weakends” is not just a clever play on words, but also features some progressive tempo changes and a chorus that’ll stick in your head for as long as you’ll let it.  My Dinosaur Life could be considered a mature masterpiece.

Track to check out: “Disappear”