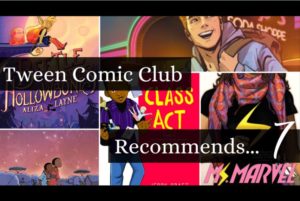 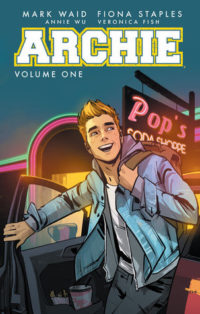 Join Archie, a small-town teenager, as he has adventures in Riverdale, many of which revolve around his love triangle with rich girl Veronica Lodge and girl-next-door Betty Cooper.

The Doctor says: “I’m a big fan of the Archie Comics series. They are funny and you can almost always count on the character’s personalities always staying the same, no matter how old or new the comic. It’s mostly about a kid named Archie and the stuff that happens to him and his friends. There are multiple series of comics inside the series, like Jughead, Betty and Veronica, and such, but they are all still part of the same basic series. You can read them in any order, so that makes it even easier to binge-read these comics.” 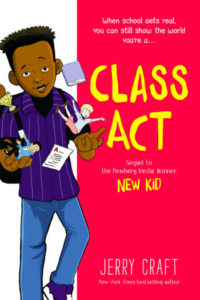 The companion book to Jerry Craft’s Newbery Award and Coretta Scott King Award-winning comic New Kid focuses on Jordan’s friend Drew as he tries to navigate life at the prestigious Riverdale Academy Day School.  But Drew can’t help but notice that life seems a lot easier for his peers, and for his friend Liam.  Can Drew overcome his feelings about Liam’s privileged lifestyle and maintain their friendship?

Ms. Krysta says: “This insightful follow-up to Craft’s Newbery-winning New Kid follows Jordan’s friend Drew as he navigates friendship difficulties. Drew likes Liam, but he feels like he can’t relate to Liam’s wealth and privilege.  Drew will have to look deep inside himself to determine what makes a friendship, and whether he’s willing to work at his.  Told with Craft’s signature heart and humor.” 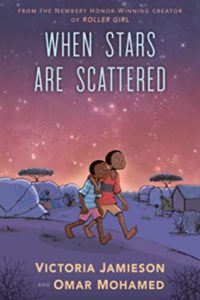 When Stars Are Scattered by Victoria Jamieson and Omar Mohamed

Omar and his younger brother Hassan are growing up in a refugee camp in Kenya, after being displaced by war from their home.  They miss their mother, but live in hope that one day they might find her again.  Then Omar gets the chance to go to school–and maybe find a way to America.  But he isn’t sure he can leave his brother alone every day.  How can you follow your dreams when you also have fears?

Ms. Faith says: “Absolutely heartbreakingly beautiful. A story for all ages and a must read for everyone. When two brothers lose everything and find themselves in a refugee camp, they do what they can to keep their hopes alive and their search for their mother a priority. After nearly a decade with no end in sight, hope is a tough thing to hold on to. A wonderful book with an inspiring mix of author’s notes at the end and just an all-around great read.” 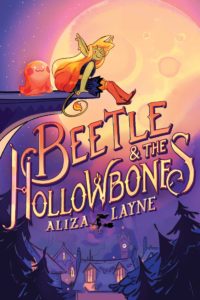 Beetle & the Hollowbones by Aliza Layne

Beetle’s best friend Blob Ghost lives at the mall, but now the Hollowbones want to tear it down to reclaim their ancestral property.  This wouldn’t be a problem–if Blob Ghost weren’t tied to the mall.  Beetle has only a few days to find out why Blob Ghost can’t leave.  But, if she wants to be successful, she will have to learn how to do the sorcery her grandmother never wanted to teach her.

Ms. Krysta says: “Layne’s original story follows the goblin Beetle as she tries to rescue her friend Blob Ghost before their home is destroyed by an impending demolition.  Told in an evocative palette of deep blues and autumnal oranges, the story transports readers to a magical world where skeletons practice sorcery and dragons guard wishing fountains.  Readers will be enchanted by the detail of Layne’s worldbuilding, but also by the fast-paced plot and the sympathetic characters.” 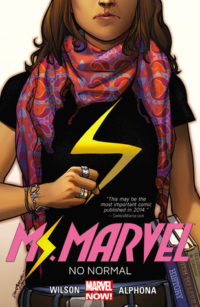 Kamala Khan is just an ordinary teenager from Jersey City until the day her Inhuman powers are unlocked.  Now she can grow or shrink, and otherwise morph her body, but how can she balance her home life and her superhero life?  And does she have what it takes to live up to the legacy of her hero, Carol Danvers?

Skylan B. says: “The perfect book for ALL superhero lovers. The book captures Kamala Khan finding out about her new super powers and learning to control them with help from her best friend Bruno. She also encounters a teenage crisis. She needs to be a superhero without trying to get in trouble with her family. Great comic. I highly suggest it.”