STEM Club: The History of Paper

Where did paper come from?

The following information comes from Wonderopolis and Kiddle.

What comes to mind when you think of technology? Many kids might picture flying cars or space shuttles. Others might think of today’s smart devices. It’s easy to think technology only includes advanced electronic devices. But technology is much more than that. It includes any object created to solve a problem. Many simple tools are examples of technology. Did you know that the wheel is technology? How about pencils? Scissors? Even paper is an example of technology!

What problem did paper solve? Well, human beings were writing for thousands of years before paper existed. Early writers used many materials. Many of these made writing difficult. Some people carved words on clay or stone tablets. Others wrote on silk, which was very costly.

Many centuries ago – as early as the 3rd millennium BC (that’s over 2000 BC) – people in Egypt made a kind of paper from the papyrus plant. This is where the word ‘paper’ comes from. The people of Greece and Rome learned to do this too. The Romans wrote on parchment made from animal skin, on waxed tablets, and on wood. In China, ancient people wrote on long bamboo strips that they tied together to make books that were very heavy.

This was a problem. In 105 CE, a man named Cai Lun came up with a solution. He was a Chinese court official who often used bamboo for writing and reading. He knew how inconvenient it was and set out to find a better way.

The material used in this ancient paper included cotton rags, hemp, various plant fibres and old fish nets. The oldest existing paper with writing on it was found in the ruins of a watchtower in the Great Wall of China. It dates to about 150 AD. Even earlier paper, but with no writing on it, has also been found in China. Paper-making was regarded by the Chinese as so valuable that they kept it secret as long as they could.

Eventually, paper also spread to central Asia and the Middle East in the 7th Century. Later, it made it to Europe, though it’s unclear how. Middle Eastern traders may have brought it there. Another theory is that Marco Polo brought paper from China.

Paper has changed a lot since 105 CE. Today, paper is made almost entirely from trees. It comes in many forms and colors, and it serves a number of purposes. 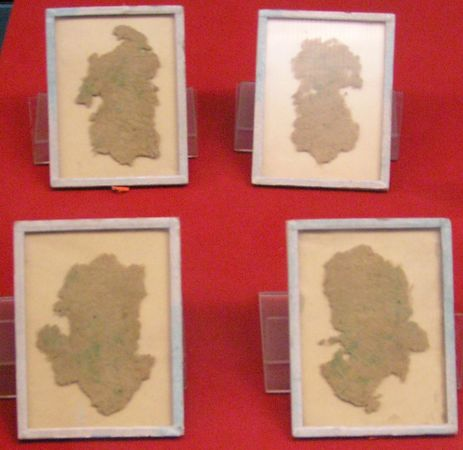 In our STEM Club session on December 2nd, we’ll be learning even more about the history of paper and how to make our own! If you would like to participate, you will need the following materials: