Kanopy Kids Movie Review: Shorts Addition: If the World Were a Village 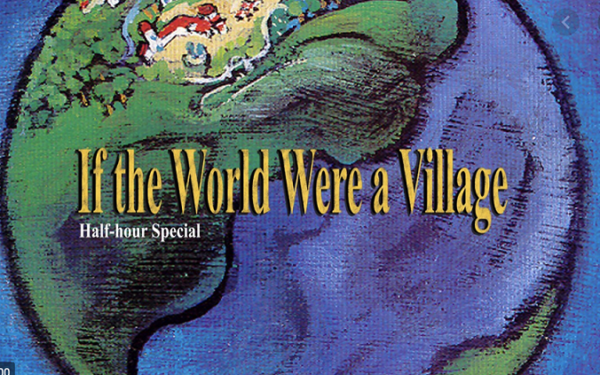 Movies can vary in origin, time, characters, effects, and timing. Timing is what we will focus on today in this blog post. Usually, movies can be up to three hours long. For example, one movie that has the longest run time, the Swedish art film Logistics (2012), is 857 hours or 35 days long. Who is ready for a movie marathon? Other movies can be 5 minutes long. These are short films, or in short, shorts, and within their allotted time, they tell a story or teach a lesson.

Today, we will focus on the short film, “If the World Were a Village,” based on the book by David J. Smith. The story behind this film is what the world would be like if we could connect people from different backgrounds? The narrator of this movie speaks in rhyme and rhythm as they explain what the world would be like if it were condensed into a village for just one day. The narrator breaks down the dynamics of our town by going into the different classifications people would mark themselves. In this post, I will cover the sections regarding the origin, age, and religion.

The narrator begins our journey by asking the question,

“Made of 100 people from all humankind,

if we could make a village, what would we find?”

There are about 6 billion people1 in the world. If we made a village of 100 people, 61 people would come from Asia (China, Russia, Japan, India, and many others). 5 inhabitants would be from North America, 13 would be from Africa, 12 people from Europe, 8 people from Central and South America, and 1 person would be from Oceania; which is someone from Australia or any island that is in the South and Central Pacific Oceans.

I found this portion super fascinating because they broke down the numbers by the Populus on each habitable continent; Asia, Africa, North and South America, Australia, and Europe. Our village is so dynamic and culturally diverse, I am excited to see what else our new home would represent, like languages or even the age groups!

We know that there would be a percentage of the village population originating from each continent and that our village would house 8 different languages, but what is the age range of the town? Would there be predominantly older people? What about younger people? In the short film, the narrator breaks down the data.  39 people would be under the age of 20 years old. 42 people would be between 20 and 49 years old. 18 people would be more than 50 years old. Only 1 person is over 80.

Religion is another demographic that people are grouped in. How many churches would our village have if we had 100 people from all over the world residing in it? 32 would be Christian, 19 would be Muslim, 13 would be Hindu, 12 would follow Animism and Shamanism, 6 people would be Buddhist, 1 person would be Jewish, and 15 people wouldn’t practice any organized religion.

How cool is our village? So many different faces, ages, and cultures, just like the whole world, there are so many dimensions to our way of life. This was just a sample of what the film discusses, I didn’t want to spoil the fun for you! This film can be found in our Digital Collection on Kanopy and is free to watch with your library card. Enjoy!

1At the time that “If the World Was A Village” was written, there were only approximately 6 billion people in the world. Currently, there are an estimated 7.8 billion people on Earth [World Population Clock: 7.8 Billion People (2021)].