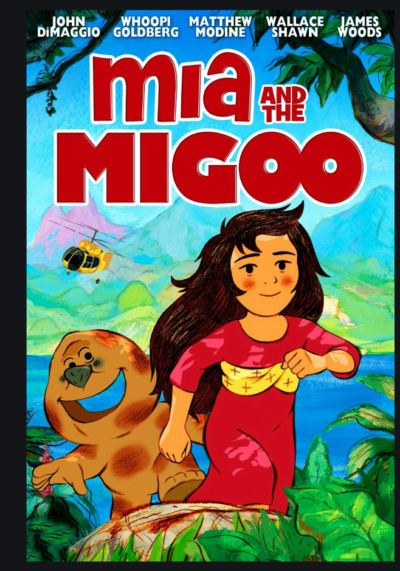 Mia and the Migoo (2008), directed by Jacques Remy Girerd, is about a man named Pedro, who takes a construction job far away from his village. A rockslide traps him in a tunnel, and his daughter, Mia, must travel to save him. Meanwhile, Mr. Jakhide (John Dimaggio), the person behind the construction site, is trying to understand what in the world is attacking his project, a new hotel in the center of a jungle. An employee informs him that an animal has broken the cranes and other machines, leaving behind massive footprints. With a deal on the line, Jakhide takes his son, Aldrin, to check in on things.

I enjoyed this movie. The artwork is stunning. Animators painted 500,000 frames for the film, and you can tell that this film was a passion project for everyone involved. Shawn Levy, a reporter from the Oregonian, states, “A hand-painted film drawn from Van Gogh and Cezanne, [Mia and the Migoo] is genuinely beautiful, with eye-popping color and motion and dreamscapes: inspired stuff.”

The cast is phenomenal in bringing this unique story to life. James Woods plays as a coworker of Pedro, who refuses to give up on his friend even when all seems lost. Whoopi Goldberg voices a sorceress who informs Mia that it is a dangerous road ahead and tells her that creatures will help her. Wallace Shawn plays Migoo and all of its multiples.

What is The Migoo, anyway, Ms. Kate?

I am delighted you asked. It is a creature that can make itself into a giant or just five feet tall, and it can control the wind and walk through walls, and as I said before, it can duplicate itself. Wallace Shawn does a great job portraying this charming character. I laughed many times from the Migoo and its clones bickering amongst themselves.  However, my laughing was cut short with John DiMaggio’s style. He was gruff, coarse, and DiMaggio did a great job making me want to stop him like Aldrin in the film.

The artwork and cast tell the story of a girl who is determined to find her father and a father who learns how to be part of a family. Together, they show us the importance of taking care of our environment.

I highly recommend this movie. I enjoyed it, and I hope you will too!