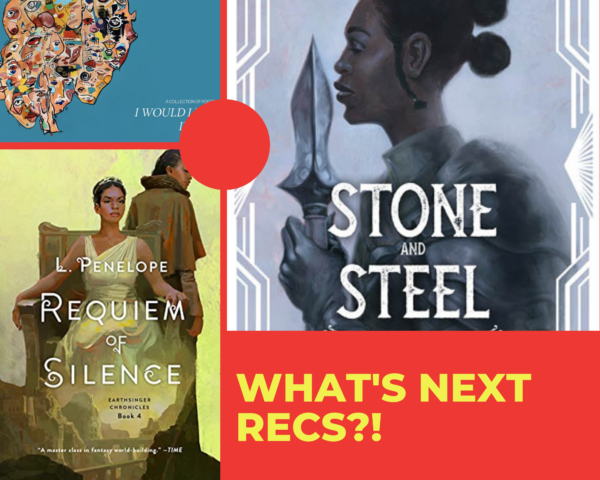 Looking for something new to read? See what some of your librarians are reading! These picks are just a few recent reads from our librarians that they enjoyed enough to share! Click the titles to explore what each book is about & see if any pique your interest!

A Shadow in the Ember by Jennifer L. Armentrout

Born shrouded in the veil of the Primals, a Maiden as the Fates promised, Seraphena Mierel’s future has never been hers. Chosen before birth to uphold the desperate deal her ancestor struck to save his people, Sera must leave behind her life and offer herself to the Primal of Death as his Consort. However, Sera’s real destiny is the most closely guarded secret in all of Lasania, she’s not the well protected Maiden, but an assassin with one mission, one target. Make the Primal of Death fall in love, become his weakness, and then … end him. If she fails, she dooms her kingdom to a slow demise at the hands of the Rot.

Requiem of Silence by L. Penelope

In the vein of K. Arsenault Rivera and V.E. Schwab comes L. Penelope’s Requiem of Silence, the epic conclusion in the stunning Earthsinger Chronicles. Civil unrest plagues the nation of Elsira as refugees from their old enemy Lagrimar seek new lives in their land. Queen Jasminda is determined to push the unification forward, against growing opposition and economic strife. But the True Father is not finished with Elsira and he may not be acting alone. He has built a powerful army. An army that cannot be killed. An army that can only be stopped by Nethersong and the help of friends and foes of Elsira alike. Former assassin Kyara will discover that she is not the only Nethersinger. She will need to join the others to harness a power that can save or end Elsira. But time is of the essence and they may not be ready by the time the True Father strikes. Sisterhood novitiate Zeli will go to the reaches of the Living World to unlock a secret that could save the kingdoms. When armies meet in the battlefield, a new world will be forged. Whether by the hands of gods or men, remains to be seen.

I Would Leave me if I could: a collection of Poetry by Halsey

In this debut collection, Halsey bares her soul. Bringing the same artistry found in her lyrics, Halsey’s poems delve into the highs and lows of doomed relationships, family ties, sexuality, and mental illness. More hand grenades than confessions, these autobiographical poems explore and dismantle conventional notions of what it means to be a feminist in search of power.

House of Sky and Breath by Sarah J. Maas

Bryce Quinlan and Hunt Athalar are trying to get back to normal they may have saved Crescent City, but with so much upheaval in their lives lately, they mostly want a chance to relax. Slow down. Figure out what the future holds. The Asteri have kept their word so far, leaving Bryce and Hunt alone. But with the rebels chipping away at the Asteri’s power, the threat the rulers pose is growing. As Bryce, Hunt, and their friends get pulled into the rebels’ plans, the choice becomes clear: stay silent while others are oppressed, or fight for what’s right. And they’ve never been very good at staying silent. In this sexy, action-packed sequel to the #1 bestseller House of Earth and Blood, Sarah J. Maas weaves a captivating story of a world about to explode and the people who will do anything to save it.

The War of Two Queens by Jennifer L. Armentrout

Casteel Da’Neer knows all too well that very few are as cunning or vicious as the Blood Queen, but no one, not even him, could’ve prepared for the staggering revelations. The magnitude of what the Blood Queen has done is almost unthinkable. Nothing will stop Poppy from freeing her King and destroying everything the Blood Crown stands for. With the strength of the Primal of Life’s guards behind her, and the support of the wolven, Poppy must convince the Atlantian generals to make war her way, because there can be no retreat this time. Not if she has any hope of building a future where both kingdoms can reside in peace. Together, Poppy and Casteel must embrace traditions old and new to safeguard those they hold dear, to protect those who cannot defend themselves. But war is only the beginning. Ancient primal powers have already stirred, revealing the horror of what began eons ago. To end what the Blood Queen has begun, Poppy might have to become what she has been prophesied to be, what she fears the most.

The sweeping tale of one young family fighting to find their place in the universe. When two soldiers from opposite sides of a never-ending galactic war fall in love, they risk everything to bring a fragile new life into a dangerous old world.

Stone and Steel by Eboni Dunbar

When general Aaliyah returns to her city triumphant, she expects to find the people of Titus prospering under the rule of her Queen and lover, the beautiful stone mage Odessa. Instead, she finds a troubling imbalance in both the citizens’ wellbeing and Odessa’s rule. Aaliyah must now rely on all her allies, old and new, to do right by the city that made her.

While renovating her house and her life, Savvy Sheldon finds things going not as planned and soon realizes that she should have started her renovation the other way around, beginning with how she sees and loves herself before she can love someone else.