CCPL Staff Picks: All About Maryland 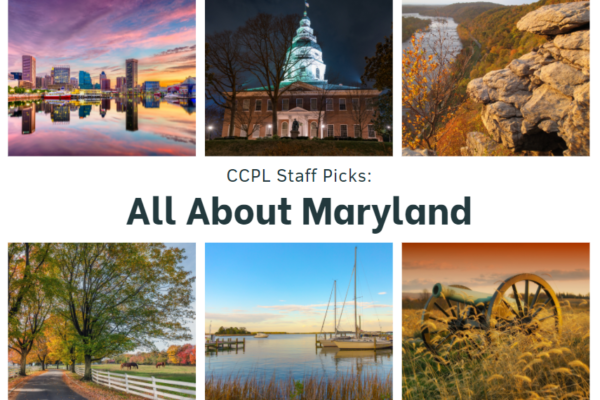 Ready to get out and explore Maryland? Check out CCPL’s recommendations for some great books on Maryland from Hoopla. These publications were chosen for their quality of content and accessibility in digital format – so you do not have to leave home to enjoy these great reads! 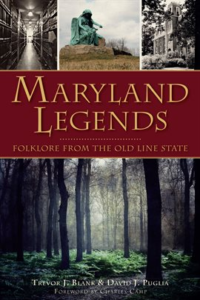 Folklore from the Old Line State

Part of the American Legends series

The demon car of Seven Hills Road, the ominous Hell House above the Patapsco River, the mythical Snallygaster of western Maryland–these are the extraordinary tales and bizarre creatures that color Maryland’s folklore. The Blue Dog of Port Tobacco faithfully guards his master’s gold even in death, and in Cambridge, the headless ghost of Big Liz watches over the treasure of Greenbriar Swamp. The woods of Prince George’s County are home to stories of the menacing Goatman, while on stormy nights at the nearby University of Maryland, the strains of a ghostly piano float from Marie Mount Hall. From the storied heroics of the First Maryland Regiment in the Revolutionary War to the mystery of the Poe Toaster, folklorists Trevor J. Blank and David J. Puglia unravel the legends of Maryland. 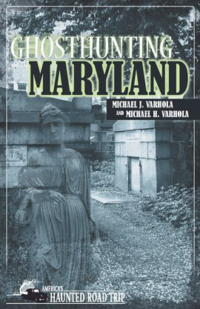 All the sites in the book have been chosen with an eye toward several criteria, including how accessible they are to the public, how evocative experience a trip to them is likely to produce, and the extent to which they actually appear to be haunted. A great many in the various regions of Maryland have some connection to the Colonial era, the War of 1812, or the Civil War, all significant aspects of the state’s haunted history. Maryland is divided into six regions for purposes of this book: Baltimore, Central, D. C. Metro, Eastern Shore, Southern, and Western. Geographically speaking, Maryland is not a large state. It is, however, among the oldest in the country, and has a rich, varied, and turbulent history that has contributed to an exceptionally high number of haunted sites. Because it is relatively compact, Maryland is in many ways an ideal state for a haunted roadtrip – especially in an era of historically high gasoline prices – and many haunted sites within the same area can easily be reached on a single weekend-long trip. Indeed, although my own home is currently in Northern Virginia, on the southern side of the Potomac River from Maryland, its furthest point from me is still somewhat less than 300 miles – as opposed to nearly 500 for some of the most distant points in southwestern Virginia. Note that this outline includes more listings than there will be room for in the book, and that a number of these will either be cut, reduced to sidebars within larger chapters, or listed in the appendix of additional haunted sites. As with Ghosthunting Virginia, research revealed early on a striking number of sites reputed by various sources to be haunted. With space in this volume for only a limited number of these, the authors carefully attempted to identify a representative selection that both emphasized variety and a struck a balance between “must include” sites – such as the graveyard where Edgar Allan Poe is buried – and more obscure ones that do not appear in any other books. 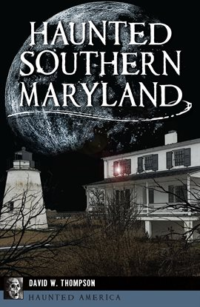 Part of the Haunted America series

Southern Maryland is one of the most haunted spots in America. From pre-colonial settlements to modern times, the tales of every era of its history are often dark and sometimes bloody. Brave readers will meet the many otherworldly specters that loved the area too much to leave, like the spirit of the witch Moll Dyer or the nun reclaiming her ancestral home. Learn the haunted history of Sotterley Plantation and the stories of the ghosts that remained after the Civil War. Author David W. Thompson takes the reader on a spooky journey through Southern Maryland’s long history. 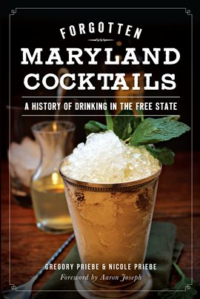 A History of Drinking in the Free State

Part of the American Palate series

The Southside, Diamondback and the Preakness-Marylanders imbibe history in their native cocktails, from local favorites to little-known classics. Early residents favored fruit brandies and potent punches until the Civil War, when rye whiskey laid claim to local palates. During the golden age of the cocktail, grand hotels like Baltimore’s Belvedere created smooth concoctions such as the Frozen Rye, but the dry days of Prohibition interrupted the good times. Using historic recipes with modern twists from renowned mixologists, Greg and Nicole Priebe mix up one part practical guide and three parts Maryland history and top it off with a tour of the current craft cocktail and distilling scenes. 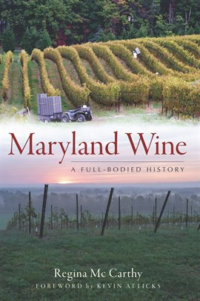 Part of the American Palate series

The roots of Maryland winemaking are surprisingly deep. The state’s first known vines were planted in 1648, and a later Marylander, John Adlum, established his place as the father of American viticulture. In the twentieth century, post-Prohibition pioneers like Philip Wagner and Ham Mowbray nurtured a new crop of daring and innovative winemakers who have made the state an up-and-coming wine region. Author Regina Mc Carthy travels through the red tobacco barns of southern Maryland and the breezy vineyards of the Eastern Shore all the way to the Piedmont Plateau and the cool mountain cellars of the west in search of the state’s finest wines and their stories. Join Mc Carthy as she traces over 350 years of the remarkable and robust history of Maryland wines. 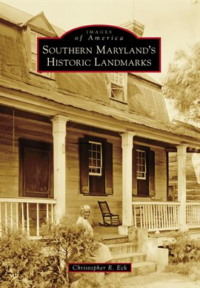 Southern Maryland is made up of a collection of peninsulas covered in low rolling hills, fields, forests, swamps, and waterways leading to the Potomac River and the Chesapeake Bay. As such, this area enjoyed relative isolation and small population for over three centuries despite its proximity to cities such as Alexandria, Annapolis, Baltimore, and Washington. Those who did settle here developed a close connection to its farms, waterways, and natural remoteness. Southern Maryland, known for the state’s earliest Colonial settlements, is composed of three of the state’s oldest counties: St. Mary’s, Charles, and Calvert. Although largely agricultural and maritime in outlook, this region was also the birthplace of the nation’s ideal of religious freedom and many of its greatest citizens, including leaders of the Revolution, the early national government, and the state. Many of their homes and churches survive as historic landmarks, or their existence has been documented and preserved for posterity. 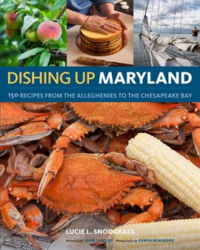 Dishing Up® Maryland by Lucie Snodgrass

150 Recipes from the Alleghenies to the Chesapeake Bay

Part of the Dishing Up® series

From the Chesapeake to the Alleghenies, Maryland offers a rich diversity of native foods and traditions. Lucy L. Snodgrass’s compilation of 150 delicious recipes from the Old Line State’s most celebrated chefs will have you feasting on Corn and Quinoa Salad with Lemon Mint Dressing, Smith Island Cake, and – of course – crab cooked every which way. This fun guide includes profiles of local food producers and mouthwatering photographs that will inspire you to cook up a taste of Maryland, wherever you live. 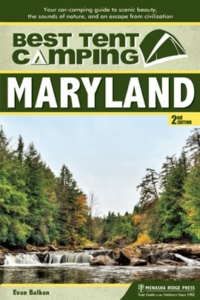 Your Car-Camping Guide to Scenic Beauty, the Sounds of Nature, and an Escape from Civilization

Part of the Best in Tent Camping series

Called “America in Miniature” by National Geographic editor Gilbert Grosvenor, Maryland packs an extraordinary amount of natural diversity into a relatively small area. With the Atlantic Ocean in the east, Allegheny Mountains in the west, and the country’s largest estuary–the Chesapeake Bay–splitting the state down the middle, any outdoors enthusiast finds a happy home in Maryland.

Splitting the state into three distinct geographical regions–Western Maryland, Central Maryland, and Southern Maryland/Eastern Shore–Best Tent Camping: Maryland, by Evan Balkan, will guide campers to 50 of the best campgrounds the state has to offer. Within these 50 profiles are campgrounds with every imaginable facility, as well as primitive campsites. 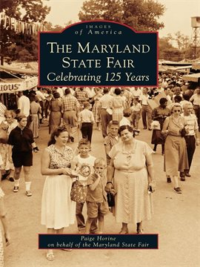 According to Gov. Robert L. Ehrich Jr., “{The Maryland State Fair} is an annual opportunity as Marylanders to come together to celebrate the history, tradition, and charm of our State during the best days of summer.” The Maryland State Fair has continued the tradition of delighting Marylanders near and far since the late 1800s. Hosting governors to 4-H’ers, farm animals to farm hands, home arts to computer arts, the fair has always promised something for everyone. Fair favorites such as the sweet, intoxicating scent of warm cotton candy and the heartthundering excitement and majesty of Thoroughbred racing were as much a part of the Maryland State Fair 125 years ago as they are today. Readers can find it all in The Maryland State Fair: Celebrating 125 Years. 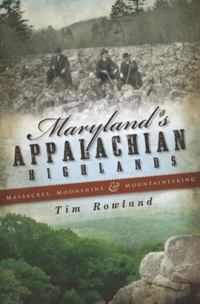 A young George Washington once roamed the peaks, Civil War soldiers battled along the ridges, and bloody Prohibition skirmishes echoed among the dark hemlocks of Maryland’s Appalachian Highlands. Local columnist and outdoorsman Tim Rowland introduces the remarkable history of the mountains of Western Maryland, from the rocky relations of Native Americans and early settlers and the Battle of South Mountain to the faded elegance of Gilded Age resorts and the coming of the B&O Railroad. With a keen eye and dry sense of humor, Rowland regales readers with tales of mischievous ghosts, presidential retreats, and intrepid hikers while celebrating the breathtaking beauty and unique culture of Maryland’s Appalachian Highlands.