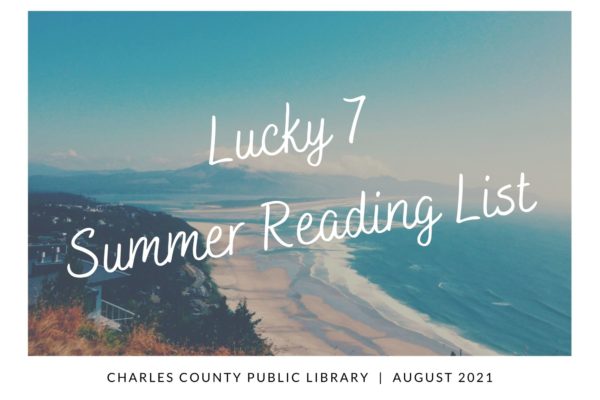 There is no better summer companion than a good book, but choosing what to read can often feel like a game of luck. This set of titles, the “lucky seven of summertime,” caters to a wide range of genres and interests. No matter which one you select, you’ll be in for a wild ride into your imagination 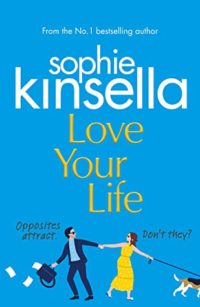 Love Your Life by Sophie Kinsella

This one-shot from Kinsella offers her trademark laughs with a heartwarming tale about what happens when you love a person but hate their life. The book begins with an interesting hook. The main character, Ava, is attending a romance novel writing retreat – the caveat being that the would-be authors cannot discuss their real lives or reveal their true names. During the weeklong retreat, Ava and Matt, another member, “fall in love” and revel in their carefree, “no baggage” existence together. This changes when the pair arrive home and realize they are not as compatible as they believed.  The book moves fast for the first few chapters covering the writing retreat. It slows down toward the middle as the inevitable problems arise between Ava and Matt. However, once these initial issues are at the forefront, the book regains its speed and remains a strong read throughout. Kinsella is a good humor/romance writer so the reader can forgive the sometimes cotton candy sweet plot and Ava’s occasional irrational tendencies. If you have read Kinsella’s Shopaholic series, you will no doubt notice the similarities between Ava and Rebecca Bloomwood. If you are not a fan of pet focused plot points, do note that Harold, Ava’s dog, is sometimes a big part of the narrative. 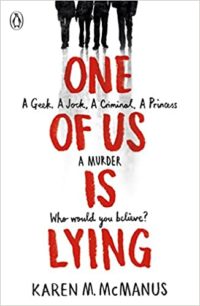 One of Us is Lying by Karen McManus

This book is marketed as YA but the action will keep anyone on the edge of their seat the entire time. The story begins like a Breakfast Club callback. Five students walk into detention. Bronwyn is the shy nerd, Cooper, the high school baseball star, Nate is a burned-out druggie, Addy is blonde and beautiful, and Simon is the writer of the school rumor website. Here McManus takes her first turn when Simon, within view of the other students, is mysteriously murdered. Tales of missing medicine, stolen phones, and car crashes soon spiral out of control. The stakes get even higher for the “Bayview Four” (as the suspected students are called) when the media reveals that each of them had a secret that Simon was threatening to tell. Each chapter focuses on a different member of the “Bayview Four”, allowing the reader to experience their different voices and vantage points as the narrative progresses. The action begins within the first few chapters, twisting and turning in unexpected ways, and doesn’t slow down until the bitter end. (I often read this in the bathtub because that’s the closest this porcelain hued librarian is getting to the beach). 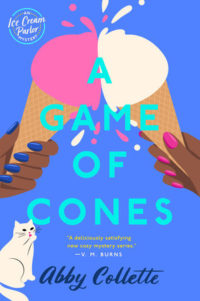 A Game of Cones by  Abby Collette

This is Collette’s second book to feature the main character of Bronwyn “Win” Crewse. (The first was also ice cream themed – A Deadly Inside Scoop). However, this title can still be read on its own with just basic context. Win is a former New York detective who has retired back to her hometown in Ohio and runs her family’s ice cream shop. In an all too familiar story, a big corporation wants to buy out the charming businesses and build a mall, ruining the small town. When the corporation’s head developer is murdered under mysterious circumstances, Win and her friends decide to find out which of the irate shopkeepers had the most to lose. The plot is further complicated when a colleague of Win’s (also introduced in the first book) arrives in town to tempt Win back to big city life. You will be on your toes as the lies fly.  While this looks like a longer title on the shelf, it reads fast and is perfect for a beach weekend. It’s a “sweet” take on a mystery novel that is sure to delight readers. 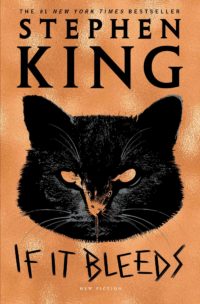 If It Bleeds by Stephen King

Look no further for chills and thrills (and a little dash of surprising sappiness) than the Master of Horror, Stephen King. This collection of short stories will keep you awake (and thinking) all night, whether you want to or not. The first of the stories is “Mr. Harrigan’s Phone.” It starts heartwarming while showing the friendship of the narrator, Craig, and his retired businessman neighbor, Mr. Harrigan. Then it turns unnerving when, after Mr. Harrigan dies, Craig learns there is something supernatural about the man’s cell phone (a gift from Craig himself). The second short is titled The Life of Chuck. As the title states, it examines the life of Chuck but in reverse, from death to childhood. This interesting prompt opens the gates for a wild ride into the meaning of life. The final two stories, the titular If It Bleeds and Rat, feature more of King’s signature horror, with a psychological twist. The latter features a reoccurring King character, Holly Gibney, investigating an odd news reporter who keeps being first on the scene of large-scale atrocities. The former brings back the classic horror scenario of a deal with the devil. Drew Larson is an unsuccessful writer trapped in his isolated writing cabin due to a storm. Delusional, Larson talks to a rat who soon can talk back. The rat promises the poor author fame and fortune if the rat can take the life of one of Larson’s family members. The stories run from about 60 to 200 pages. Since many of King’s other works can be much longer, this is recommended for anyone who wants an afternoon read. 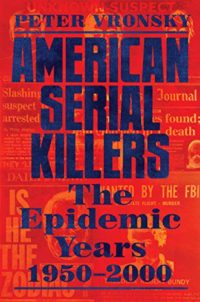 This book covers more modern serial killers such as Ted Bundy. For older killers, like Jack the Ripper, check out Vronsky’s earlier work, Sons of Cain. This book examines the period, the “Epidemic Years” as Vronsky calls them, in which there was a “surge” of serial murderers. The first few chapters are dedicated to examining why this surge occurred. The book goes down much like a smooth but disturbing podcast you can’t seem to turn off. Fans of true crime makeup artist, Bailey Sarian, will love this title. Each page turns with morbid fascination. This is a narrative into the shadowlands of society but it’s worth the read. 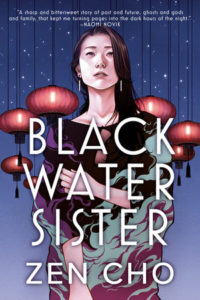 Author Zen Cho provides a brilliant blend of culture, fantasy, and suspense in this book. The main character, Jess, is moving her parents back to their home country of Malaysia, a place she hasn’t been since she was a child. While there, Jess discovers that she is being haunted by the ghost of her estranged, now deceased grandmother, herself a spiritual medium during her life. Jess soon learns that the spirit has unresolved issues that it wants Jess to avenge. Naturally, Jess is terrified of this supernatural being inhabiting her brain. But, she soon learns that she has more power than she realizes. A large portion of the story takes place in Malaysia and incorporates many aspects of Malaysian culture. Most of the terms are explained with context but be prepared to look up those that are less obvious. Also, many of the characters do not speak fluent English and their dialogue is written to reflect such. The book also discusses lesbianism with the relationship of Jess and her girlfriend. As well as being tied to an earthbound ghost through her grandmother, Jess is also somewhat of a “ghost” among the living.

Read It, Watch It 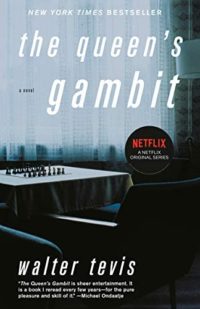 The Queen’s Gambit by Walter Tevis

For fans of the acclaimed Netflix television series or those just looking for a good read, this novel delivers. Set in a world of competitive chess, this story makes for a fast and fulfilling read. The main heroine, Elizabeth “Beth” Harmon, is an orphan who discovers she has a remarkable talent for the game of chess. As she grows, she works to beat the game mechanics and become the greatest “grandmaster” in the world. Set into the background are Beth’s alcohol and drug addiction, life in a male dominated field, and living through the Cold War. The book makes for an easy read as most of the chapters are broken down into small sections that move smoothly from one (sometimes ill fated) action to the next. On the surface, there seems to be a lack of details on the page. However, upon further reading, the author gives the perfect amount of details to keep the reader invested instead of bogged down. There are numerous chess terms, obviously, but even those with little knowledge of chess should not find much issue with them. But be prepared if you are the kind of reader to get easily confused.