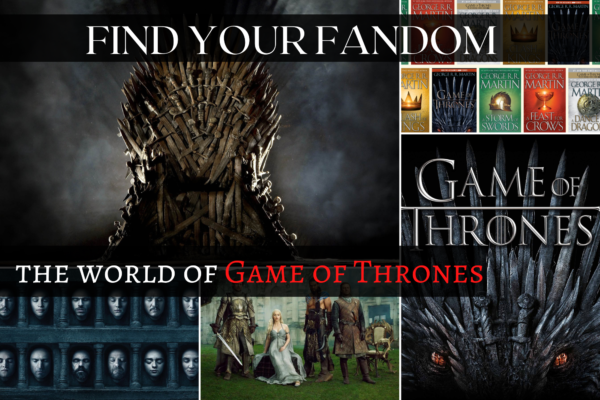 Are you looking for a new fandom to immerse yourself in but not sure where to start?  “Find Your Fandom” is a series that provides the information you need to figure out where to start in your new fandom journey.  Keep checking back on the blog for future installments!

A grand epic fantasy told across 8 seasons and 5 novels (and counting)…enter a world full of scheming, fighting, and magic from American novelist George R. R. Martin. The first of the planned 7 volumes was published in 1996, and the series has continued to reach successful accolades in the world of fantasy writing. Dive head first into an immersive world with dragons, dire wolves, magic, and more! 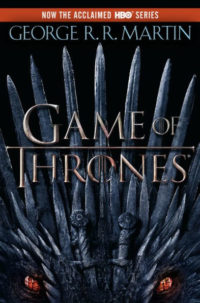 A Game of Thrones

Long ago, in a time forgotten, a preternatural event threw the seasons out of balance. In a land where summers can last decades and winters a lifetime, trouble is brewing. The cold is returning, and in the frozen wastes to the north of Winterfell, sinister and supernatural forces are massing beyond the kingdom’s protective Wall. At the center of the conflict lie the Starks of Winterfell, a family as harsh and unyielding as the land they were born to. Sweeping from a land of brutal cold to a distant summertime kingdom of epicurean plenty, here is a tale of lords and ladies, soldiers and sorcerers, assassins and bastards, who come together in a time of grim omens. Here an enigmatic band of warriors bear swords of no human metal; a tribe of fierce wildlings carry men off into madness; a cruel young dragon prince barters his sister to win back his throne, and a determined woman undertakes the most treacherous of journeys. Amid plots and counterplots, tragedy and betrayal, victory and terror, the fate of the Starks, their allies, and their enemies hang perilously in the balance as each endeavors to win that deadliest of conflicts: the game of thrones. 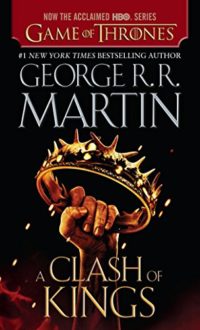 A Clash of Kings

A Clash of Kings transports us into a magnificent, forgotten land of revelry and revenge, wizardry and warfare. It is a tale in which maidens cavort with madmen, brother plots against a brother, and the dead rise to walk in the night. Here a princess masquerades as an orphan boy; a knight of the mind prepares poison for a treacherous sorceress, and wild men descend from the Mountains of the Moon to ravage the countryside. Against a backdrop of incest and fratricide, alchemy, and murder, the price of glory may be measured in blood. And the spoils of victory may just go to the men and women possessed of the coldest steel . . . and the coldest hearts. For when rulers clash, all of the land feels the tremors. 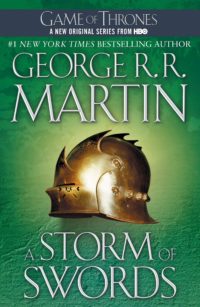 A Storm of Swords

The Seven Kingdoms are torn by strife as the three surviving contenders for the throne continue their struggle for power, Robb Stark defends his fledgling kingdom from the ravaging Greyjoys, Winterfell lies in ruins, Jon Snow confronts an escalating threat from behind the Wall, and Daenerys Stormborn and her dragon allies continue to grow in power. Joffrey, of House Lannister, sits on the Iron Throne, the uneasy ruler of the land of the Seven Kingdoms. His most bitter rival, Lord Stannis, stands defeated and disgraced, the victim of the jealous sorceress who holds him in her evil thrall. But as opposing forces maneuver for the final titanic showdown, an army of barbaric wildlings arrives from the outermost line of civilization. In their vanguard is a horde of mythical Others–a supernatural army of the living dead whose animated corpses are unstoppable. As the future of the land hangs in the balance, no one will rest until the Seven Kingdoms have exploded in a veritable storm of swords. 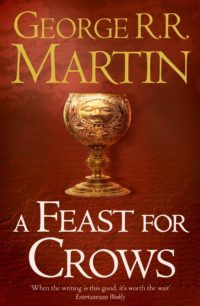 A Feast for Crows

After centuries of bitter strife and fatal treachery, the seven powers dividing the land have decimated one another into an uneasy truce. The war, which raged out of control for so long, has burned itself out. But as in the aftermath of any climactic struggle, it is not long before the survivors, outlaws, renegades, and carrion eaters start to gather, picking over the bones of the dead and fighting for the spoils of the soon-to-be dead. Now in the Seven Kingdoms, as the human crows assemble over a banquet of ashes, daring new plots and dangerous new alliances are formed, while surprising faces–some familiar, others only just appearing–are seen emerging from an ominous twilight of past struggles and chaos to take up the challenges ahead. It is a time when the wise and the ambitious, the deceitful and the strong will acquire the skills, the power, and the magic to survive the stark and terrible times that lie before them. It is a time for nobles and commoners, soldiers and sorcerers, assassins and sages to come together and stake their fortunes … and their lives. For at a feast for crows, many are the guests–but only a few are the survivors. 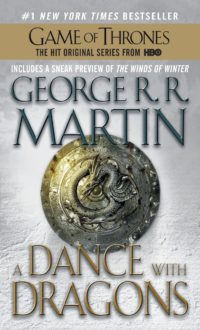 A Dance With Dragons

New threats emerges to endanger the future of the Seven Kingdoms, as Daenerys Targaryen, ruling in the East, fights off a multitude of enemies, while Jon Snow, Lord Commander of the Night’s Watch, faces his foes both in the Watch and beyond the great Wall of ice and stone. 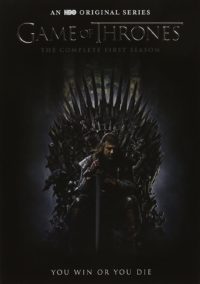 Set in a world where summers span decades and winters can last a lifetime. From the scheming south and the savage eastern lands, to the frozen north and ancient Wall that protects the realm from the mysterious darkness beyond, the powerful families of the Seven Kingdoms are locked in a battle for the Iron Throne. This is a story of duplicity and treachery, nobility and honor, conquest, and triumph. In the Game of Thrones, you either win or you die. 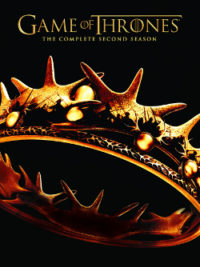 This new HBO Drama is set in a world where summers span decades and winters can last a lifetime. From the scheming south and the savage eastern lands, to the frozen north and the ancient wall that protects the realm from the mysterious darkness beyond, the powerful families of the Seven Kingdoms are locked in a battle for the Iron Throne. 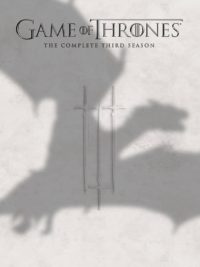 In the third season of the HBO hit drama series Game of Thrones, the Lannisters barely hold on to the throne after a savage naval onslaught from Stannis Baratheon, while stirrings in the north threaten to alter the overall balance of power. Robb Stark, King in the North, faces major calamity in his efforts to build on his victories over the Lannisters while beyond the Wall, Mance Rayder and his huge army of wildlings continue their inexorable march south. Across the Narrow Sea, Daenerys Targaryen- reunited with her three fast-maturing dragons- attempts to raise an army to sail with her from Essos, in hopes of eventually claiming the Iron Throne. In Season 3 of this original series based on George R. R. Martin’s bestselling books, the battling families of Westeros continue to clash as bonds are strained, loyalties are tested, and cruel fates are met. 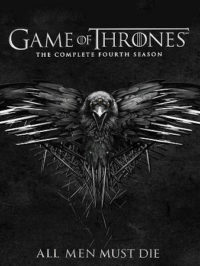 As the season begins, encouraged by the Red Wedding slaughter in the Riverlands that wiped out many of their Stark nemeses, the Lannisters’ hold on the Iron Throne remains intact. But can they survive their own egos as well as new and ongoing threats from the south, north and east? 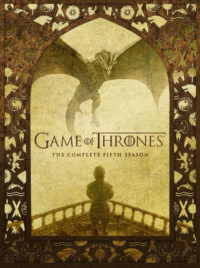 This season begins with a power vacuum that protagonists across Westeros and Essos look to fill. At Castle Black, Jon Snow struggles to balance the demands of the Night’s Watch with those of the newly-arrived Stannis Baratheon, who styles himself as the rightful king of Westeros. Meanwhile, Cersei scrambles to hold on to power in King’s Landing amidst the Tyrells and the rise of a religious group led by the enigmatic High Sparrow, while Jamie embarks on a secret mission. Across the Narrow Sea, Arya seeks an old friend while a fugitive Tyrion finds a new cause. And as danger mounts in Meereen, Daenerys Targaryen finds that her tenuous hold on the city requires some hard sacrifices. This season features some of the most explosive scenes yet, as the promise that “winter is coming” becomes more ominous than ever before. 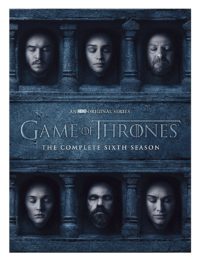 After the shocking developments at the end of season 5 — including Jon Snow’s bloody fate at the hands of Castle Black mutineers, Daenerys’ near-demise at the fighting pits of Meereen, and Cersei’s public humiliation in the streets of King’s Landing — survivors from all parts of Westeros and Essos regroup to press forward, inexorably, towards their uncertain individual fates. Familiar faces will forge new alliances to bolster their strategic chances at survival, while new characters will emerge to challenge the balance of power in the east, west, north and south. 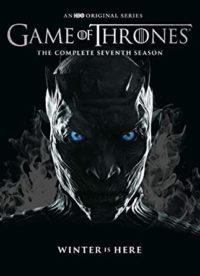 Season 7 focuses on a convergence of armies and attitudes that have been brewing for years. As factions drive towards new alliance or violent conflicts, the specter of another apocalyptic threat looms in the form of an army of undead White Walkers. 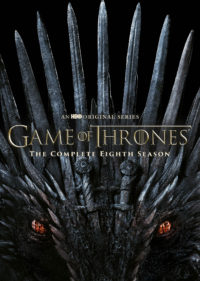 With the Army of the Dead–led by the Night King, his White Walkers and an undead dragon–bearing down on Jon and Dany and their combined forces, a denouement eight seasons in the making will be reached, answering a myriad of questions surrounding the fate of the series’ protagonists. Meanwhile, Jon’s true identity promises to undermine Dany’s claim to the Iron Throne…and, or course, Cersei has a devious strategy of her own.