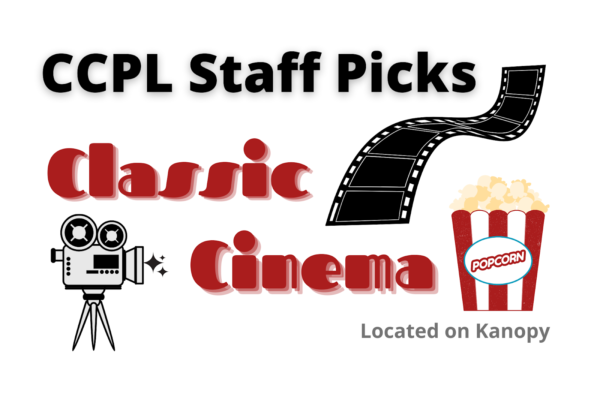 Tired of watching the latest and greatest on TV only to have it disappear the next week. Well, try watching classic cinema! It has been around so long it won’t be going anywhere, as it is watched again and again. Some are in Black and White, many in Technicolor, and there’s no digital trickery;  just great cinematography.  All of these classics can be found on Kanopy. And CCPL cardholders get access to 4 play credits a month.  Having trouble what to watch, here’s a list of potential candidates hand-selected just for you.  Classic Cinema includes a wide range of titles, so you are bound to find something that speaks to you!

An awesome cast – including John Wayne, Kirk Douglas, and Henry Fonda is interwoven into this account of the attack itself, as well as into the triumphs and tragedies of disobeyed orders, the American counter-offensive, father-son reunions, battles at sea, and layers of romantic entanglements. It’s a story that’s been told and re-told, but perhaps never so completely.

In this undeniable gem of Hollywood’s golden age, Walter, a hard-boiled newspaper editor, discovers that his ex-wife and former employee, Hildy, is set to marry a wet-blanket insurance salesman. Walter, certain that this is the wrong move for a strong-willed and ambitious woman such as Hildy, decides to sabotage her marital plans by enticing her with one last story–the execution of a convicted murderer.

A farcical romantic comedy set in WWII France, about young lovers forbidden to marry by their respective families. Baker, as “Zazu,” the owner of a nightclub, inherits a job restoring harmony between the two families and allowing the young lovers to ‘se marier.’

Ex-tennis pro Tony Wendice (Ray Milland) wants to have his wealthy wife, Margot (Grace Kelly), murdered so he can get his hands on her inheritance. When he discovers her affair with Mark Halliday (Robert Cummings), he comes up with the perfect plan to kill her. He blackmails an old acquaintance into carrying out the murder, but the carefully-orchestrated set-up goes awry. Now Wendice must frantically scheme to outwit the police and avoid having his plot detected.

Frankenstein director James Whale turned J.B. Priestley’s novel “Benighted” into this nerve-jangling tale that became the template for all spooky-house chillers to come. Stranded travelers stumble upon a strange old house, and find themselves at the mercy of a highly eccentric and potentially dangerous family.

In 2020, after the colonization of the moon, the spaceships Vega, Sirius, and Capella are launched from Lunar Station 7.

Western legends Pat Garrett, Doc Holliday, and Billy the Kid are played against each other over the law and the attentions of vivacious country vixen Rio McDonald.

An angel in human form enters the life of a bishop to order to help him build a new cathedral and repair his fractured marriage.

U.S. agent Nick Allen (Billy Dee Williams) has his own idea about how to fight a war on drugs: go to the source…and cut the big-time traffickers down. Embittered over the drug-related death of his teenage daughter, Nick sets out to do just that. With stone-cold intensity, he locates and trains a dirty half-dozen recruits for a commando raid on the kingpins of a French drug syndicate. Each recruit has his or her own reason for being part of the death squad. And each has a lethal, take-no-prisoners specialty. Richard Pryor co-stars as one of the daring team members, and an underwater warfare expert armed with a deadly air and a killer wit.

When Ted King, captain of a pearling lugger discovers a body floating in the Torres Strait, he becomes unwittingly embroiled in a people-smuggling  plot. Determined to get to the bottom of the mystery he is joined by his first mate, Jack Janiero, and the recently arrived owner of the pearling company, city playboy Peter Merriman. Merriman has to prove himself worthy, not only to the crew but also to win the affections of Ted’s daughter, Rusty.

The courage-filled story of the Allied Resistance and the Paris Liberation of 1944. As the Nazi jackboot marches through Europe, the freedom fighters of Paris mount a brave resistance.

Family Friendly: My Side of the Mountain (1969)

Sam leaves home for the mountains after being told that the family trip has been canceled, preventing him from doing the algae experiments he had planned for. The film chronicles his struggle for independence, and his battle with the forces of nature.

Book to Screen: The Autobiography of Miss Jane Pittman (1974)

Beginning during the racial turmoil of 1960s Louisiana, 110-year-old ex-slave Jane Pittman (Cicely Tyson) grants an interview to a persistent journalist and relates the remarkable story of her life. Orphaned early, she toils on a plantation until a chance meeting with a white Union soldier named Brown changes her outlook. Jane’s emancipation marks only the beginning of an arduous and heartbreaking odyssey, framed by the horrors of slavery and the justice of the civil rights movement.

Having directed two undisputed masterpieces – Citizen Kane and The Magnificent Ambersons – Orson Welles delved into the suspense film, crafting a baroque postwar thriller that drew upon the style of his previous work, while laying the groundwork for his later film noir classics The Lady from Shanghai and Touch of Evil. Edward G. Robinson stars as Wilson, a government agent who tracks down a high-ranking Nazi officer (Welles) who has managed to craft a new identity for himself in a quaint Connecticut town, marrying the daughter (Loretta Young) of a local judge.

In this classic musical romantic comedy, a young woman (Miyoshi Umeki) arrives in San Francisco’s Chinatown from Hong Kong with the intention of marrying a rakish nightclub owner (Jack Soo), unaware he is involved with one of his singers (Nancy Kwan).

A reporter (Barbara Stanwyck) writes a fictitious column about someone named “John Doe,” who is distraught at America’s neglect of the little people and plans to kill himself.

The newspaper then hires an ex-ballplayer (Gary Cooper) to pose as John Doe. In a series of radio addresses written by a publisher with fascist leanings, Doe captures the public’s imagination. When he finally realizes he has been used, Doe comes to his senses and becomes the man he never knew he could be.

A professor returns home after a long absence to introduce his wife to his father and two brothers, but the family reunion has unexpected and disturbing consequences. Based on one of Harold Pinter’s greatest plays.

Anne and Frederique are sisters entering their teen years in 1963 France, torn between divorced parents and struggling with the confines of their strict school. Along the way, they undergo an awakening both political and romantic.

Making the grueling overland journey years after the end of the war, she tracks Antonio down and finds him a changed man. This heart-wrenching reunion will forever alter the course of their lives.

All of a sudden, mysterious men in a fancy car appear in the village and show an interest in the rundown manor house. Gossip spreads quickly, and some villagers think there will be a re-parceling of properties and a land swap with West Germany. They assume everything will go back to how it used to be and even expect the count to return to his manor. In preparation, the situation in the village escalates at a fevered pitch.

Shinichi “Sonny” Chiba (Kill Bill, The Shogun’s Samurai) is a martial arts “manimal.” The last member of a race of werewolves and a big city private investigator, Sonny isn’t friendly with the police nor the gangland thugs running the nastier parts of the city. Based on a manga by Kazumasa Hirai (creator of 8 Man), and never before released outside of Japan, WOLF GUY is a genre film classic waiting to be discovered.

Traveling to accept an honorary degree, Professor Isak Borg–masterfully played by veteran director Victor Sjostrom–is forced to face his past, come to terms with his faults, and make peace with the inevitability of his approaching death.