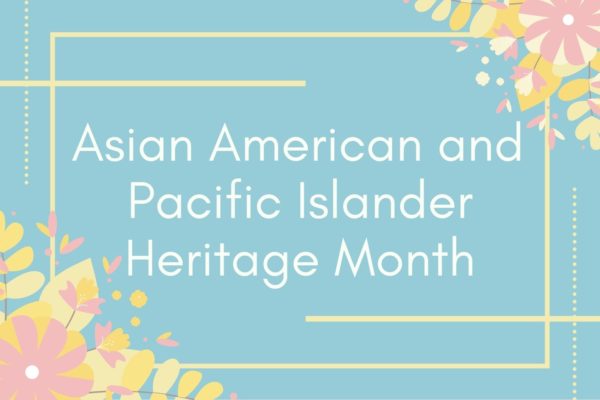 Since 1922, May has been recognized as Asian American and Pacific Islander (AAPI) Heritage Month. This designation celebrates the heritage, culture, people, and contributions of AAPI living within the United States. The AAPI community includes anyone with heritage from the Asian continent and the Pacific island regions, including Melanesia, Micronesia, and Polynesia.

In the 1970s, the first ten days of May were initially recognized for the AAPI heritage celebration. These ten days included two historical milestones: the first Japanese immigrants arrived in America on May 7, 1843, and the transcontinental railroad was completed on May 10, 1869. The transcontinental railroad is recognized as a significant AAPI contribution due to the high volume of Asian workers used to construct it.

Celebrate and honor Asian American and Pacific Islander heritage this May by checking out some great selections by AAPI creatives! Here’s a list to get you started, and our staff will be happy to give you more! 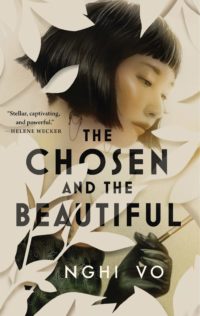 The Chosen and the Beautiful by Nghi Vo

Immigrant. Socialite. Magician. Jordan Baker grows up in the most rarefied circles of 1920s American society-she has money, education, a killer golf handicap, and invitations to some of the most exclusive parties of the Jazz Age. She’s also queer and Asian, a Vietnamese adoptee treated as an exotic attraction by her peers, while the most important doors remain closed to her. But the world is full of wonders: infernal pacts and dazzling illusions, lost ghosts, and elemental mysteries. In all paper is fire, and Jordan can burn the cut paper heart out of a man. She just has to learn how. Nghi Vo’s debut novel The Chosen and the Beautiful reinvents this classic of the American canon as a coming-of-age story full of magic, mystery, and glittering excess, and introduces a major new literary voice. – From Cosmos 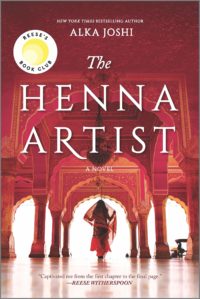 The Henna Artist by Alka Joshi

Escaping from an abusive marriage, seventeen-year-old Lakshmi makes her way alone to the vibrant 1950s pink city of Jaipur. There she becomes the most highly requested henna artist – and confidante – to the wealthy women of the upper class. But trusted with the secrets of the wealthy, she can never reveal her own…

Known for her original designs and sage advice, Lakshmi must tread carefully to avoid the jealous gossips who could ruin her reputation and her livelihood. As she pursues her dream of independent life, she is startled one day when she is confronted by her husband, who has tracked her down these many years later with a high-spirited young girl in tow – a sister Lakshmi never knew she had. Suddenly the caution that she has carefully cultivated as protection is threatened. Still, she perseveres, applying her talents and lifting up those that surround her as she does. – From Cosmos 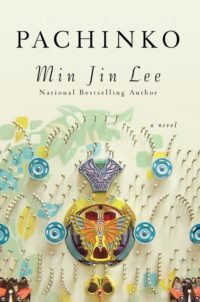 A new tour de force from the bestselling author of Free Food for Millionaires, for readers of The Kite Runner and Cutting for Stone. Pachinko follows one Korean family through the generations, beginning in early 1900s Korea with Sunja, the prized daughter of a poor yet proud family, whose unplanned pregnancy threatens to shame them all. Deserted by her lover, Sunja is saved when a young tubercular minister offers to marry and bring her to Japan. So begins a sweeping saga of an exceptional family in exile from its homeland and caught in the indifferent arc of history. Through desperate struggles and hard-won triumphs, its members are bound together by deep roots as they face enduring questions of faith, family, and identity. – From Cosmos 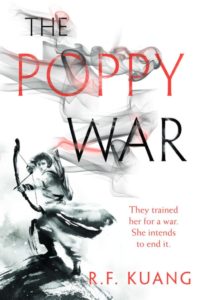 The Poppy War by R.F. Kuang

When Rin aced the Keju–the Empire-wide test to find the most talented youth to study at the academies–it was a shock to everyone: to the test officials, who couldn’t believe a war orphan from Rooster Province could pass without cheating; to Rin’s guardians, who always thought they’d be able to marry Rin off to further their criminal enterprise; and to Rin herself, who realized she was now finally free of the servitude and despair that had made up her daily existence. That she got into Sinegard–the most elite military school in the Nikara Empire–was even more surprising.

But surprises aren’t always good. Being a dark-skinned peasant girl from the south is not an easy thing at Sinegard. Rin is targeted from the outset by rival classmates because of her color, poverty, and gender. Driven to desperation, she discovers she possesses a lethal, unearthly power–an aptitude for the nearly mythical art of shamanism. Exploring the depths of her gift with the help of a seemingly insane teacher and psychoactive substances, Rin learns that gods long thought dead are very much alive–and that mastering control over her powers could mean more than just surviving school. For even though the Nikara Empire is at peace, the Federation of Mugen still lurks across a narrow sea. The militarily advanced Federation occupied the Nikara Empire for decades after the First Poppy War, and only barely lost the continent in the Second. And while most of the people in the Empire would rather forget their painful history, a few are aware that a Third Poppy War is just a spark away.

Rin’s shamanic powers may be the only way to save her people. But as she finds out more about the god who has chosen her, the vengeful Phoenix, she fears that winning the war may cost her humanity. And it may already be too late. – From Cosmos 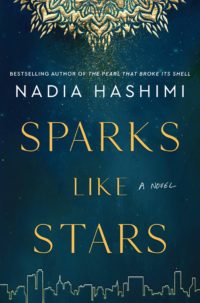 Kabul, 1978: The daughter of a prominent family, Sitara Zalmani lives a privileged life in Afghanistan’s thriving cosmopolitan capital. The 1970s are a time of remarkable promise under the leadership of people like Sardar Daoud, Afghanistan’s progressive president, and Sitara’s beloved father, his right-hand man. But the ten-year-old Sitara’s world is shattered when communists stage a coup, assassinating the president and Sitara’s entire family. Only she survives.

Smuggled out of the palace by a guard named Shair, Sitara finds her way to the home of a female American diplomat, who adopts her and raises her in America. In her new country, Sitara takes on a new name – Aryana Shepherd – and throws herself into her studies, eventually becoming a renowned surgeon. A survivor, Aryana has refused to look back, choosing instead to bury the trauma and devastating loss she endured…

New York, 2018: Forty years after that fatal night in Kabul, Aryana’s world is rocked again when an elderly patient appears in her examination room – a man she never expected to see again. It is Shair, the soldier who saved her, yet may have murdered her entire family. Seeing him awakens Aryana’s fury and desire for answers – and, perhaps, revenge.

Realizing that she cannot go on without finding the truth, Aryana embarks on a quest that takes her back to Kabul–a battleground between the corrupt government and the fundamentalist Taliban – and through shadowy memories of the world she loved and lost. – From Cosmos 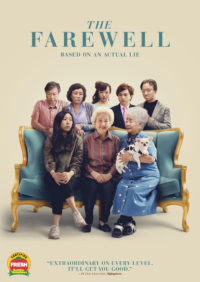 Chinese-born, U.S.-raised Billi reluctantly returns to Changchun to find that, although the whole family knows their beloved matriarch, Nai-Nai, has been given mere weeks to live, everyone has decided not to tell Nai Nai herself. To assure her happiness, they gather under the joyful guise of an expedited wedding, uniting family members scattered among new homes abroad. As Billi navigates a minefield of family expectations and proprieties, she finds there’s a lot to celebrate. – From Cosmos 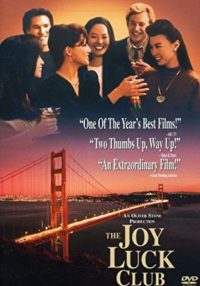 Four mothers. Four daughters. Eight stories. The Joy Luck Club is four women in San Francisco who have played mahjong together on a weekly basis for forty-some years. One of them, Suyuan, has died, and her daughter June is preparing to go to China. Auntie Lindo with daughter Waverly, Auntie Ying Ying with daughter Lena, and Auntie An Mei with daughter Rose are at the going away party.

Born in China, the Joy Luck Club members came to America as young adults; their daughters are 100% American. The old days are seldom spoken about, and some things about those times have never been said aloud, but the experiences left behind color the hopes and expectations these women have for their daughters. If daughters become their mothers–no matter how much both parties desire that it not happen–daughters also become different from their mothers–despite all attempts to perpetuate the status quo. – From Cosmos 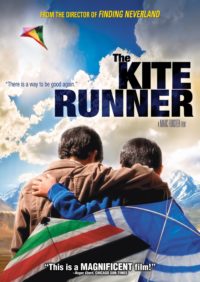 In a divided country on the verge of war, two childhood friends, Amir and Hassan, are about to be torn apart forever. It’s a glorious afternoon in Kabul and the skies are bursting with the exhilarating joy of a kite-fighting tournament. But in the aftermath of the day’s victory, one boy’s fearful act of betrayal will mark their lives forever and set in motion an epic quest for redemption. Now, after twenty years of living in America, Amir returns to a perilous Afghanistan under the Taliban’s iron-fisted rule to face the secrets that still haunt him and take one last daring chance to set things right. – From Cosmos 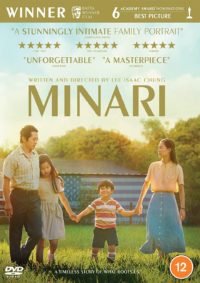 A tender and sweeping story about what roots people that follows a Korean-American family that moves to a tiny Arkansas farm in search of their own American Dream. The family home changes completely with the arrival of their sly, foul-mouthed, but incredibly loving grandmother. Amidst the instability and challenges of this new life in the rugged Ozarks, this film shows the undeniable resilience of family and what really makes a home. – From Cosmos 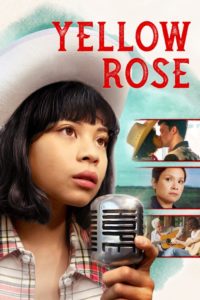 A Filipina teen from a small Texas town fights to pursue her dreams as a country music performer while having to decide between staying with her family and leaving the only home she has known.

Rose, an undocumented Filipino girl, dreams of one day leaving her small Texas town to pursue her country music dreams. Her world is shattered when her mom suddenly gets picked up by immigration and Customs Enforcement. Rose, facing this new reality, is forced to flee the scene, leaving behind the only life she knows, and embarks on a journey of self-discovery as she searches for a new home in the honky tonk world of Austin, Texas. – From Cosmos