The Charles County Public Library (CCPL) was originally formed in 1922 by the Homemaker’s Clubs of Charles County with the help of Extension Agent Paul Dennis “PD” Brown. The first library was housed in La Plata on the second floor of the old town jail (which still stands behind the County Courthouse today). The collection contained 3,000 volumes and additional books were delivered by railroad from Baltimore’s Enoch Pratt Free Library.

Until 1950, the library was funded through private donations and fundraising. That year the Board of Trustees was formed and the library hired its first full-time librarian. Soon after, the system added a bookmobile to deliver materials throughout the county. Additional library branches were set up in 1959 at Potomac Heights and in 1964 at Waldorf. A fourth branch was added in 1973 at the Bryans Road Shopping Center.

The Potomac Heights location was called Glymont. Glymont Library moved to Rt. 210 and Glymont Road in 1982. Glymont closed in 1991 and merged with the library branch in Bryans Road. These combined libraries are now known as the Potomac Branch and moved into the current location on Ruth B. Swann Drive in November, 1996.

In the summer of 1966, the La Plata Library moved into its current home at the corner of Garrett and Charles Streets. In June of 1981, after outgrowing a series of smaller spaces, Waldorf opened at its current location in a building bearing the name of the Charles County Public Library’s founder, P.D. Brown. The P.D. Brown Memorial Branch in Waldorf underwent an expansion and remodeling in September 2001. 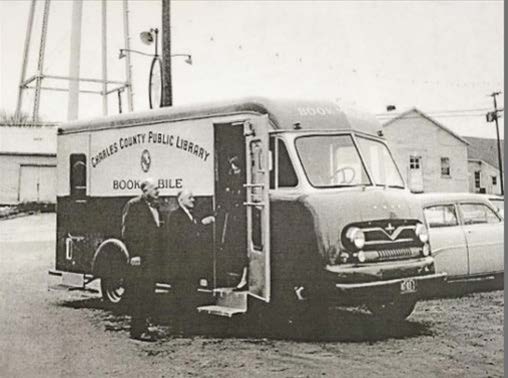 Much has changed since the books arrived by train and were kept in a jail. The Charles County Public Library now has a staff of more than 80 full-time and part-time employees. Our three branches house over 200,000 volumes of printed material, audio books, film, and other documents. A fourth branch, Waldorf West, opened in October 2012. Currently, there are over 70,000 county residents who have library cards and that number grows every day. If you don’t have a card yet, come in and see us.