CCPL Staff Picks – What Your Librarians Are Reading! 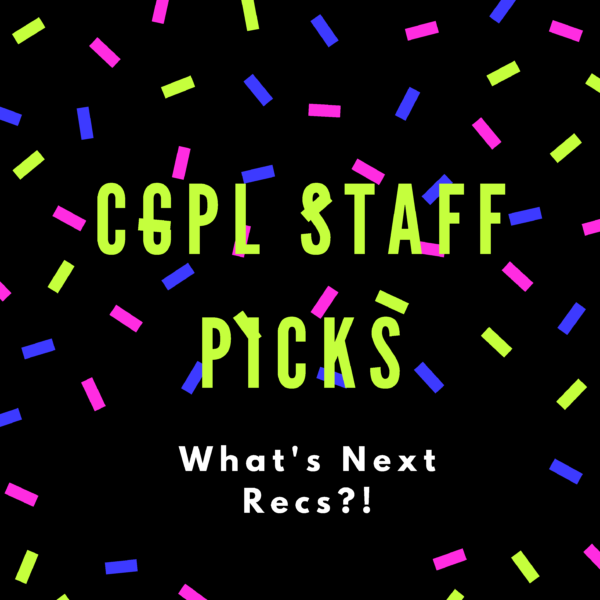 Remember a time when you could go to your local library & engage in a book talk with a librarian about potential reads? Well, here’s the next best thing… see what some of your librarians are reading! These picks are just a few recent reads from our librarians that they enjoyed enough to share! Click the titles to explore what each title is about & see if any peak your interest!

And, if you would like to come talk to a librarian in person, we are opening all of our branches back up with regular hours and no appointments, starting July 12. So stop by and see us! 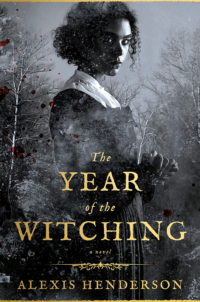 The Year of the Witching by Alexis Henderson

A young woman living in a rigid, repressive society discovers dark powers within herself, with terrifying and far-reaching consequences, in this stunning, feminist fantasy debut. In the lands of Bethel, where the Prophet’s word is law, Immanuelle Moore’s very existence is blasphemy. The daughter of an union with an outsider that cast her once-proud family into disgrace, Immanuelle does her best to worship the Father, follow Holy Protocol, and lead a life of submission, devotion, and absolute conformity, like all the women in the settlement. But a chance mishap lures her into the forbidden Darkwood surrounding Bethel, where the first prophet once chased and killed four powerful witches. Their spirits are still walking there, and they bestow a gift on Immanuelle: the diary of her dead mother, who Immanuelle is shocked to learn once sought sanctuary in the wood. Fascinated by secrets in the diary, Immanuelle finds herself struggling to understand how her mother could have consorted with the witches. But when she begins to learn grim truths about the Church and its history, she realizes the true threat to Bethel is its own darkness. And she starts to understand that if Bethel is to change, it must begin with her. 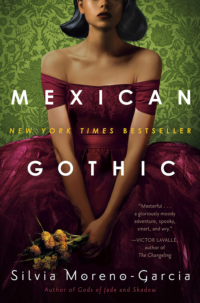 After receiving a frantic letter from her newly-wed cousin begging for someone to save her from a mysterious doom, Noemi Taboada heads to High Place, a distant house in the Mexican countryside. She’s not sure what she will find–her cousin’s husband, a handsome Englishman, is a stranger, and Noemi knows little about the region. Noemi is also an unlikely rescuer: She’s a glamorous debutante, and her chic gowns and perfect red lipstick are more suited for cocktail parties than amateur sleuthing. But she’s also tough and smart, with an indomitable will, and she is not afraid: Not of her cousin’s new husband, who is both menacing and alluring; not of his father, the ancient patriarch who seems to be fascinated by Noemi; and not even of the house itself, which begins to invade Noemi’s dreams with visions of blood and doom. Her only ally in this inhospitable abode is the family’s youngest son. Shy and gentle, he seems to want to help Noemi, but might also be hiding dark knowledge of his family’s past. For there are many secrets behind the walls of High Place. The family’s once colossal wealth and faded mining empire kept them from prying eyes, but as Noemi digs deeper she unearths stories of violence and madness. 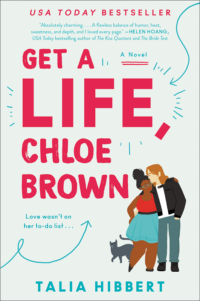 Get a Life, Chloe Brown by Talia Hibbert

Emerging from a life-threatening illness, a fiercely organized but unfulfilled computer geek recruits a mysterious artist to help her establish meaning in her life, before finding herself engaged in reckless but thrilling activities. 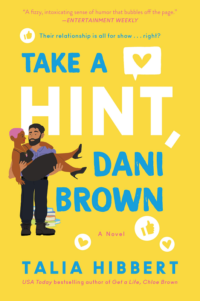 Danika Brown knows what she wants: professional success, academic renown, and an occasional roll in the hay to relieve all that career-driven tension. But romance? Been there, done that, burned the T-shirt. Romantic partners, whatever their gender, are a distraction at best and a drain at worst. So Dani asks the universe for the perfect friend-with-benefits – someone who knows the score and knows their way around the bedroom. When big, brooding security guard Zafir Ansari rescues Dani from a workplace fire drill gone wrong, it’s an obvious sign: PhD student Dani and former rugby player Zaf are destined to sleep together. But before she can explain that fact to him, a video of the heroic rescue goes viral. Suddenly, half the internet is shipping #DrRugbae – and Zaf is begging Dani to play along. Turns out his sports charity for kids could really use the publicity. Lying to help children? Who on earth would refuse? 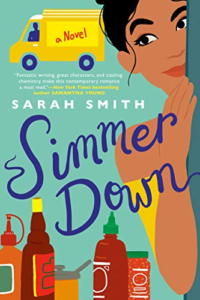 Simmer Down by Sarah Smith

In this finger-licking good rom-com, two is the perfect number of cooks in the kitchen. Nikki DiMarco knew life wouldn’t be all sunshine and coconuts when she quit her dream job to help her mom serve up mouthwatering Filipino dishes to hungry beach goers, but she didn’t expect the Maui food truck scene to be so eat-or-be-eaten–or the competition to be so smoking hot. But Tiva’s Filipina Kusina has faced bigger road bumps than the arrival of Callum James. Nikki doesn’t care how delectable the British food truck owner is–he rudely set up shop next to her coveted beach parking spot. He’s stealing her customers and fanning the flames of a public feud that makes her see sparks. The solution? Let the upcoming Maui Food Festival decide their fate. Winner keeps the spot. Loser pounds sand. But the longer their rivalry simmers, the more Nikki starts to see a different side of Callum… a sweet, protective side. Is she brave enough to call a truce? Or will trusting Callum with her heart mean jumping from the frying pan into the fire? 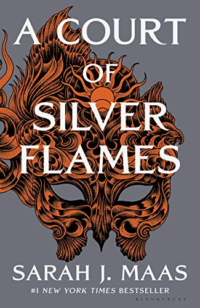 A Court of Silver Flames by Sarah J. Maas

Nesta Archeron has always been prickly-proud, swift to anger, and slow to forgive. And ever since being forced into the Cauldron and becoming High Fae against her will, she’s struggled to find a place for herself within the strange, deadly world she inhabits. Worse, she can’t seem to move past the horrors of the war with Hybern and all she lost in it. The one person who ignites her temper more than any other is Cassian, the battle-scarred warrior whose position in Rhysand and Feyre’s Night Court keeps him constantly in Nesta’s orbit. But her temper isn’t the only thing Cassian ignites. The fire between them is undeniable, and only burns hotter as they are forced into close quarters with each other. Meanwhile, the treacherous human queens who returned to the Continent during the last war have forged a dangerous new alliance, threatening the fragile peace that has settled over the realms. And the key to halting them might very well rely on Cassian and Nesta facing their haunting pasts. Against the sweeping backdrop of a world seared by war and plagued with uncertainty, Nesta and Cassian battle monsters from within and without as they search for acceptance-and healing-in each other’s arms. 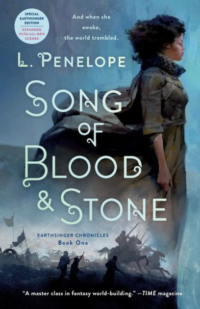 Song of Blood and Stone by L. Penelope

Orphaned and alone, Jasminda is an outcast in her homeland of Elsira, where she is feared for both the shade of her skin and her magical abilities. When ruthless soldiers seek refuge in her isolated cabin, they bring with them a captive — an injured spy who steals her heart. Jack’s mission behind enemy lines nearly cost him him life but he is saved by the healing power of a mysterious young woman. Together they embark on a perilous journey straight into the heart of a centuries-old conflict. Thrust into a hostile society, Jasminda and Jack must rely on one another even as secrets jeopardize their bond. As an ancient evil gains power, Jasminda races to unlock a mystery that promises salvation. The fates of two nations hang in the balance as Jasminda and Jack must choose between love and duty to fulfill their destinies and end the war. 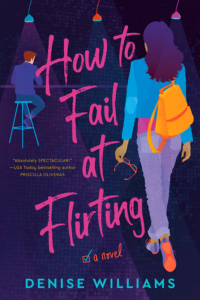 How to Fail at Flirting by Denise Williams

One daring to-do list and a crash course in flirtation turn a Type A overachiever’s world upside down. When her flailing department lands on the university’s chopping block, Professor Naya Turner’s friends convince her to shed her frumpy cardigan for an evening on the town. For one night her focus will stray from her demanding job and she’ll tackle a new kind of to-do list. When she meets a charming stranger in town on business, he presents the perfect opportunity to check off the items on her list. Let the guy buy her a drink. Check. Try something new. Check. A no-strings-attached hookup. Check … almost. Jake makes her laugh and challenges Naya to rebuild her confidence, which was left toppled by her abusive ex-boyfriend. Soon she’s flirting with the chance at a more serious romantic relationship–except nothing can be that easy. The complicated strings around her dating Jake might destroy her career. Naya has two options. She can protect her professional reputation and return to her old life or she can flirt with the unknown and stay with the person who makes her feel like she’s finally living again.