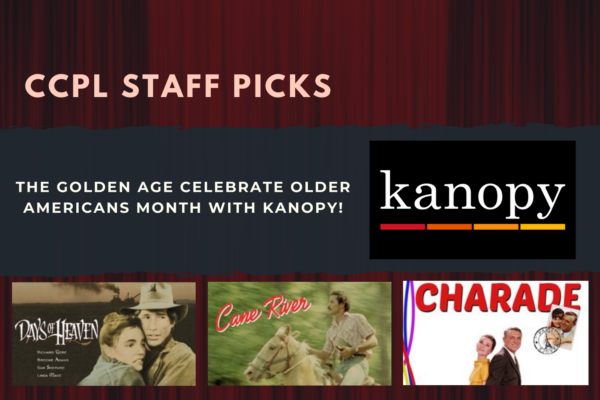 Since 1963, May has been designated as “Older Americans Month” and to celebrate, CCPL presents a list of popular titles available through Kanopy to celebrate Older Americans Month.  If you haven’t signed up for Kanopy already, now’s the time.  All you need is your library card and pin number. You’ll find a mixture of classic films, dramas, comedies, and romances below along with some synopses. So check them out and start watching!

“A story of love and murder told through the jaded voice of a child and expressive images of nature. Bill (Richard Gere), a fugitive from the slums of Chicago, finds himself pitted against a shy, rich Texan for the love of Abby (Brooke Adams).” – Kanopy

“England, 1959. Free-spirited widow Florence Green (Emily Mortimer) risks everything to open a bookshop in a conservative East Anglian coastal town. While bringing about a surprising cultural awakening through works by Ray Bradbury and Vladimir Nabokov, she earns the polite but ruthless opposition of a local grand dame (Patricia Clarkson) and the support and affection of a reclusive book loving widower (Bill Nighy).

As Florence’s obstacles amass and bear suspicious signs of a local power struggle, she is forced to ask: is there a place for a bookshop in a town that may not want one?” – Kanopy

“In this equally thrilling and romantic classic, Regina Lampert (Audrey Hepburn) falls for the dashing Peter Joshua (Cary Grant) while on holiday in the French Alps. Her newfound romance is interrupted, however, upon her return home, when it is revealed that her husband has been murdered. Regina and Peter soon find themselves pursued by her husband’s World War II cronies, Tex (James Coburn), Scobie (George Kennedy) and Gideon (Ned Glass), who are after the quarter of a million dollars the quartet stole while behind enemy lines.” – Kanopy

Taking him in, they discover that he is Andrea, a violinist from Krakow, Poland, who had been swept off an ocean liner on which he was sailing to a fresh start in America. Although Ursula feels an unfamiliar spark of infatuation for the handsome young musician, propriety suggests the attraction must remain unspoken.” – Kanopy

“The loons are back again on Golden Pond and so are Norman Thayer, a retired professor, and Ethel who have had a summer cottage there since early in their marriage. This summer their daughter Chelsea — whom they haven’t seen for years — feels she must be there for Norman’s birthday. She and her fiance are on their way to Europe the next day but will be back in a couple of weeks to pick up the fiance’s son. When she returns Chelsea is married and her stepson has the relationship with her father that she always wanted. Will father and daughter be able to communicate at last?” -Kanopy

“An epic story of a mysterious stranger with a harmonica who joins forces with a notorious desperado to protect a beautiful widow from a ruthless assassin working for the railroad.” -Kanopy

“Written, produced, and directed by Emmy Award-winning documentarian, Horace B. Jenkins, and crafted by an entirely African American cast and crew, CANE RIVER is a racially-charged love story in Natchitoches Parish, a “free community of color” in Louisiana. A budding, forbidden romance lays bare the tensions between two black communities, both descended from slaves but of disparate opportunity–the light-skinned, property-owning Creoles and the darker-skinned, more disenfranchised families of the area. This lyrical, visionary film disappeared for decades after Jenkins died suddenly following the film’s completion, robbing generations of a talented, vibrant new voice in African American cinema. Available now for the first time in nearly forty years in a brand-new, state-of-the-art 4k restoration.” -Kanopy

“As new generations discover the magic of silent cinema, Buster Keaton has emerged as one of the era’s most admired and respected artists. Behind the deadpan expression and trademark porkpie hat was a filmmaking genius who conceived and engineered some of the most breathtaking stunts and feats of visual trickery, while never losing sight of slapstick cinema’s primary objective: laughter.” – Kanopy