Tamora Pierce is an acclaimed American writer, perhaps best known for her popular fantasy books led by strong female protagonists.  Among her works are many set in the fictional medieval-esque world of Tortall.  The Tortall books were optioned in 2019 for a TV series, meaning that Pierce’s work has lately seen a resurgence of interest.  So where should you start reading if you want to learn all about Pierce’s fantasy world?  Publication order is perhaps the easiest way to make your way through them all.  Here is a quick guide to the (current) Tortall books, listed in proposed reading order.

Song of the Lioness

Alanna of Trebond dreams of becoming a knight, even though girls are not allowed.  To pursue her dream, she switches places with her brother Thom and disguises herself as “Alan” before presenting herself as a new page at the royal palace.  The series follows Alanna as she fights to prove herself as a woman knight, all while making friends with the king of thieves, catching the eye of the handsome prince, and becoming mortal enemies with a man determined to take the throne for himself–no matter the cost.  This quartet contains the first books Pierce wrote set in Tortall and are an excellent introduction to her world.

In the Hand of the Goddess

The Immortals quartet takes place some time after the events of the Song of the Lioness series.  It follows Daine, a young girl who possesses Wild Magic that allows her to speak with animals and even take on their forms.  She begins training with the mage Numair, becoming embroiled with the affairs of the gods along the way.  The quartet can be read on its own, but readers who have already read Song of the Lioness will be pleased to see Alanna make a reappearance.

The Realms of the Gods

Protector of the Small

Alanna’s success has opened the way for girls to train officially to become knights.  Keladry “Kel” of Mindelan is the first to try.  She faces additional challenges as the boys in her program harass her and her teachers do not believe in her.  Over the course of the series, however, Kel progresses to knighthood, eventually fighting for her kingdom as an official knight.  The series is set after the events of the Song of the Lioness and Immortals Quartets.

Alianne (Aly) of Pirate’s Swoop is Alanna’s daughter, but her parents have prevented her from becoming a spy from Tortall.  She finds herself captured by pirates and sold to the Copper Isles.  There the Trickster god recruits her to join an uprising of the native population against their conquerors. 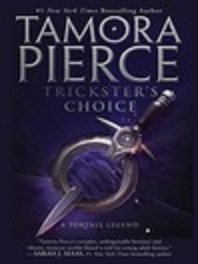 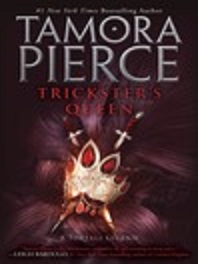 The Numair Chronicles is a proposed trilogy that moves back in time to follow Daine’s mentor from the Immortals quartet as he trains to become a mage.  The first book starts with him entering the University in Carthak.  You may want to read the Immortals quartet before starting this ongoing series.

This companion book contains documents from George Cooper’s desk, revealing interesting tidbits about familiar characters and some more history of Tortall.  It is not necessary for readers to pick up this book to understand the others, but it is a nice volume for die-hard fans who cannot get enough of Tortall. Best read after the Song of the Lioness and Trickster books, for fans who do not wish to be spoiled.

Tortall and Other Lands:  A Collection of Tales

This is a collection of short stories for fans who have already read the other books set in Tortall.  Readers will particularly want to be familiar with the Immortals quartet and the Trickster duology before picking up this volume, if they want to avoid spoilers.