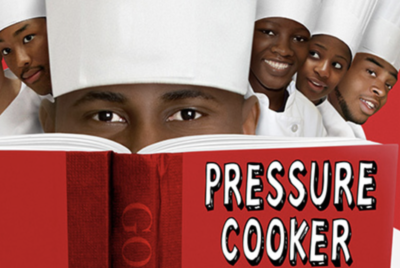 *WARNING: Slight cursing in this documentary*

This documentary follows the culinary program at Frankford High School in Philadelphia, PA. The program, led by Mrs. Stephenson, teaches the kids how to cook and essential life lessons. The documentary also follows three students; Fatoumata, Tyree (called “Dudley” by his friends), and Eric as they navigate their senior year in the hopes of leaving their hometown and achieving their dreams.

Fatoumata is a student that was born and raised in Mali, Africa. In her interview, she describes what life was like. She would walk 20 miles a day for her schooling. Her dream is to achieve a scholarship to college. She shows us more of her life in Africa in her essay. She lived with her mother while her father left to make money in America until it stopped. Fatoumata’s paternal family took her away from her mother, which was the last time she saw her. She lives in Philadelphia with her father and stepmother, where she does most of the cleaning and cooking. The culinary art class is her new family.

Erica is concerned that the responsibilities she has in her family will hold her back. Erica helps take care of her 15-year-old sister, who is legally blind. “When I eat, she eats, and when I dress, she dresses,” Erica says. Erica had to grow up quickly instead of enjoying her childhood. Her parents divorced when she was two-years-old, and when she was twelve, her mother kicked her and her sibling out of the house. Ever since then, they have been living with their father. Even though Erica likes helping out in the family, she is scared that the responsibilities will keep her trapped in Frankford. She needs an escape, and the one way she can is by receiving a scholarship.

“Dudley” is a football player who participates in the culinary program. He thrives under the pressure of Mrs. Stephenson; he enjoys learning by her example. As the only son of the family, he holds a lot of responsibility, like raising his kid sister. “Dudley” comes from a single-parent home and has faced hardships growing up. For example, when he was young, someone stole his Christmas presents on Christmas Eve. He isn’t the only one who wants a scholarship; his mother does too. She hopes it will help the whole family get out of the area.

Mrs. Stephenson leads the culinary program and watches out for her students by ensuring they have a better future. She does this by selling cookies to save up enough money for her pupil’s college applications. There is another scene where Mrs. Stephenson gets Dudley’s measurements to buy him a preliminaries dress shirt. She not only teaches her students how to cook but how to enjoy life outside of class; she urges Fatoumata and Erica out to get prom dresses. Stephenson is genuine in what she does with her students every day she is with them. “Nothing’s ever too much for them to do,” she says about her students.

Soon it is the day of the preliminaries, where judges decide which students will move onto the finals to receive school scholarships. I was stressed, and I wasn’t the one cooking crepes! Thankfully, all of Mrs. Stephenson’s students pass on to the finals. If you weren’t sweating during the preliminaries, then you have to be while watching the finals. I squirmed in my seat as I watched Fatoumata, “Dudley”, and Erica, making their dishes to be judged. I think I even held my breath a few times!

The final act is watching the students walk across the stage in graduation. You cry with Mrs. Stephenson as you watch her students move on to bigger and better things.

I loved this documentary. You gravitate to the high stake’s culinary education world very quickly, and by doing such, you hope the Frankford students can succeed. I am going to be honest; I teared up a few times watching this because it is such a moving piece about pushing against stereotypes and following your dreams. As Mrs. Stephenson states, “Dreams are a reality that you must work for.”

I hope you enjoy this documentary as much as I did.