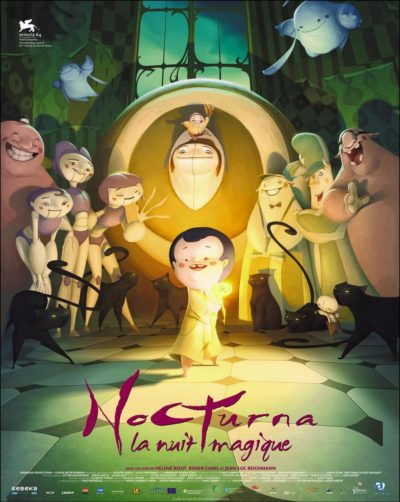 Nocturna (2007), directed by Adrià Garcia and Victor Maldonado, is an inventive movie about moving past your fears and keeping the memories of loved ones with you wherever you go. Nocturna is about an orphan boy named Tim, who is afraid of the dark. One night, however, he finds that his star, Adhara, is missing, as well as other stars! While investigating what has happened, he stumbles across the nighttime world of Nocturna. With the help of the Cat Shepherd and a cat named Tobermory, he must bring the stars back before a shadow takes them all!

I enjoyed this movie. The animation is beautiful. The movements of the characters are unbelievably smooth. I was captivated by how the Cat Shephard, Tim’s trusted guide, runs across the rooftops with his “herd” of felines. I think that was one of my favorite scenes, just because of how calculated the Cat Shepherd’s movements were.

The creatures that reside in Nocturna have roles in our world. At the beginning of the movie, when all of the other children wake up from their sleep, there is a montage of kids noticing that a sock is missing or wetting the bed. You might think that ‘oh, these are all just accidents,’ but creatures have jobs on these details. We meet them with Tim as he wanders through the world of Nocturna. The residents of this world are dreamlike themselves. There are the “Hair-Messers,” a trio of robotic women who have long fingers perfect for giving sleeping people messy hair. “Clumps always work,” one Hair-Messer says.

There are “luminouses”, small creatures who look like fireflies if they were construction workers. There are also “foggers,” animals that give or take away the fog. Even the night sky is reimagined. The moon is the face of a giant clock. It’s the phases like the minute hands. The stars are on little hooks that can go up or down. I thought these features were fascinating. One character is gross, though. He is the henchman to Nocturna’s leader, Moka, his name is Pee, his design isn’t weird, but his job is to make people wet the bed. Gross right?

The cast of characters is enjoyable. My favorite had to have been the Cat Shepherd, Tim’s guide for Nocturna. He is a grumpy Gus, but he is also very protective of who he cares about, either his cats or Tim. I also enjoyed the Hair-Messers as a group; they had very dry humor that made me laugh a few times. Tim was also a delightful main character. We get to watch the movie through his eyes as well as watch him conquer his fears.

The plot of the movie teaches us what fear can do. The shadow affecting Nocturna and attacking its residents is a metaphor of fear consuming a person’s life. Because of his phobia of the dark, Tim has trouble settling to bed, engaging with kids, and carrying it with him wherever he goes, and Tim can be the only one who can change this.

I hope you enjoy this movie as much as I did. There is so much to like, how could you not? Have a great movie night!